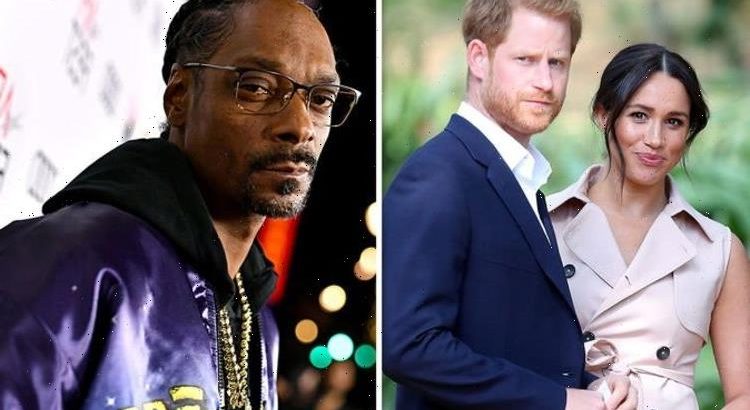 Prince Harry and Meghan are a 'magnetic' couple says expert

Prince Harry, 37, has gained himself an unlikely fan in the form of rapper and LA resident Snoop Dogg, 49, who has praised the royal for having “balls” to live the “life he wants”. The Duke Of Sussex has faced a number of critics for his decision to step down last year as a senior working member of the royal family.

However, Snoop says he “respects” Prince Harry and Meghan Markle for leading their lives on their own terms, adding that he supports the duo despite “the whole world judging them”.

“I said Prince Harry had big balls when he didn’t invite Trump to his wedding. And now, for real, I say he’s got an even bigger set of balls,” he told Daily Mirror.

“Him and Meghan are living their lives like they want and that can’t be an easy thing with the whole world judging them.

“They got to live life their way – they get a lot of respect from me for that.”

The hip hop icon went on to invite the royal couple round to Snoop’s house for Thanksgiving dinner – adding they’d be in for “something special” if they chose to accept.

He noted that he learnt all of his cooking skills from renowned chef, Gordon Ramsay.

The Drop It Like It’s Hot hit-maker is also known to have a close bond with football legend David Beckham, who he claims has been his friend for 15 years now.

Snoop rose to fame at the age of 28, after featuring on Dr Dre’s 1992 debut album The Chronic.

Since their move stateside last year, the Sussexes have made their mark amongst the Hollywood A list.

At the Emmys last month, the couple was praised by Cedric The Entertainer, who couldn’t resist poking fun at the Royal Family as he referenced Prince Harry and Meghan’s bombshell claims in their Oprah Winfrey interview.

As he spoke to the crowd who had gathered in Los Angeles for the ceremony, the comedian joked: “As great as The Crown is, it pales in comparison to the real monarchy…

“Oh, I mean that Oprah interview with Prince Harry and Megan. That was the real tea right there, wasn’t it!?”

Cedric took jabs at the monarchy and revealed his shock at the couple’s claim that a senior royal had questioned how dark their son, Archie Harrison Mountbatten-Windsor’s skin tone was going to be before he was born.

He continued: “Meghan must put it on that boy because he renounced his throne quicker than Eddie Murphy in Coming to America.”

The star added as the crowd laughed: “I can’t believe they were talking about little Archie. How dark that little baby gonna be.”

“I can just see it now, baby Archie with the Queen, ‘Like come on Gammy.’”

He then pictured what it would be like if Queen Elizabeth and Archie made a TikTok together: “The whole crown behind them like, ‘OK your majesty, I see you.’”

Josh O’Connor and some of The Crown cast were seen on camera looking sheepish as Cedric joked on stage.

The funnyman lived up to his name as he entertained the crowd with jokes about the fact guests had to be fully vaccinated in order to attend.