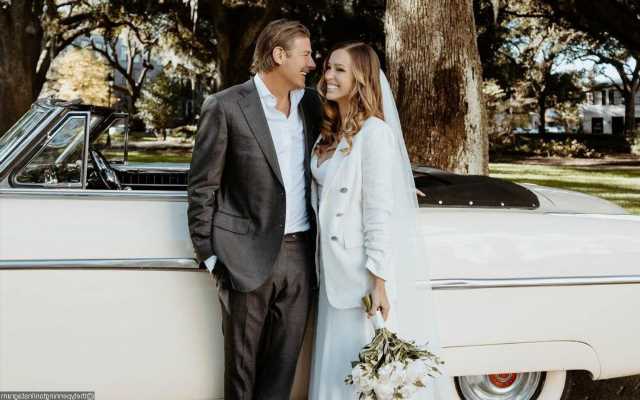 The ‘Trading Spaces’ alum and his fiancee exchange ‘I do’ in front of just eight guests in the nuptials, which takes place in the 19th-century home they’re still renovating together.

AceShowbiz -“Trading Spaces” alum Ty Pennington is now a married man! The HGTV personality and his fiancee Kellee Merrell tied the knot in a small ceremony on Saturday, November 27 at their home in Savannah, Georgia.

The newlyeds exchanged “I do” in front of just eight guests in the nuptials, which took place in the 19th-century home they’re still renovating together. The famous carpenter took to his Instagram account to broke the exciting news.

In a post on Sunday, Ty shared a picture from their intimate wedding. The couple could be seen posing in front of a classic white convertible outside their home. The bride looked gorgeous in a flowing floor-length gown. She completed her style with a white oversized blazer. As for Ty, the TV star was handsome in a gray suit and white button-up, while his long locks was slicked back for the occasion.

“We did it,” so he simply wrote in the caption. The post was quickly flooded with congratulatory messages and well-wishes from fellow HGTV stars. “Wow wow!!! Congratulations. Now the real journey begins,” said “Property Virgins” star Egypt Sherrod. Meanwhile, designer Carrie Locklyn commented, “Congratulations so happy for you both!! Stunning.”

Ty proposed to Kellee in July with the former announcing their engagement on Instagram. At the time, he treated fans with a picture of Kellee’s hand resting over Pennington’s with her teardrop-shaped diamond ring on full display. “It’s the ‘yes’ for me….”

The couple met for the first time in 2010 when Ty was filming a TV show in Toronto. They stayed in contact for over two years, but things took a romantic turn in 2020 as they decided to quarantine together.

Interestingly, Ty previously revealed that things could go differently as he was actually offered a spot on “The Bachelor” following the success of his show “Trading Spaces”. “Yeah, it’s nuts. So, I did Trading Spaces, and I wasn’t even sure what was gonna happen with that show,” the 56-year-old renovation show icon shared.

He continued, “I got a call from a producer in L.A., ‘You would live in a house with like 20 girls and you would have to spend time with them in hot tubs and at the end of it, you’d have to decide who you should marry. And I’m just like this, ‘What?!’ What a different trajectory my life would have been if I had done that.”