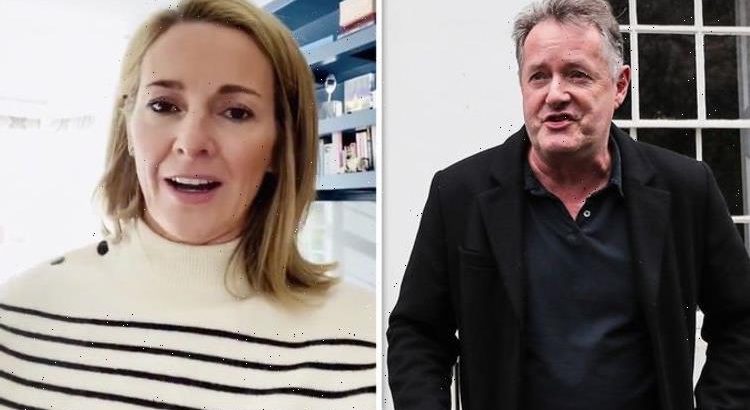 Gabby Logan, 48, has hit out at Piers Morgan, 55, on Twitter today after he criticised the decision for the “Covid-ravaged Olympics” to go ahead this year in Tokyo and insisted “nobody cares” about the games. The BBC presenter fired back at the former Good Morning Britain host and said he was “wrong” and does not “speak for everyone” with his opinions.

Piers typed in view of his 7.9 million followers: “Nobody cares about these Covid-ravaged Olympics.

“I feel incredibly sorry for all the athletes still trying to live their Olympic dream, but that is the harsh reality.

“It should have been either further postponed or cancelled,” he added.

Gabby, who took over from Dan Walker this morning on Sunday’s Olympic Breakfast, responded: “I think you are wrong Piers. I think some people do care.

“You might not, but I don’t think you speak for everyone,” she finished.

Piers later clarified his comments, as he said he felt “sad” over the dipped ratings for the Olympics due to a number of differing factors.

In response to Gabby’s tweet, the 55-year-old typed: “Tanking TV ratings (33yr low in US) sadly suggest most people don’t.

“I say this with nothing but sadness as I normally love the Olympics.

“But the lack of fans, Covid-enforced drop-outs, off-field scandals, & host nation public fury due to health threat has ruined it.”

However, Gabby was still unconvinced by Piers’ argument, as she pointed out that other “wealthy” sporting events, including the 2020 Euros (attended by the former GMB host) were able to continue without a hitch.

“But for largely amateur/state-funded sports who rely on the Olympic cycle to continue training we can’t support them just this once?

“It’s not the same, but very little is,” she pointed out.

Gabby’s comments come as yesterday double-vaccinated Piers revealed he had contracted coronavirus while watching England lose to Italy in the Euro 2020 final at Wembley on July 11.

In order to attend the match, football fans had to provide proof they were either double vaccinated or produce a negative test result.

However, Piers claims he started to feel unwell just two days after the match, while at his home in Sussex.

After taking a lateral flow test that displayed a positive result, he later took a PCR test, confirming he was in fact positive, four days after the match.

Writing in his Mail On Sunday column, Piers penned: “As I’m sure everyone who gets it feels, it’s a strange, disquieting moment to know I have this killer virus inside me.”

The broadcaster, who was jabbed with the Oxford AstraZeneca vaccination, claims a respiratory expert informed him no vaccine fully protects an individual from the latest variants.

He went on to write: “And my voice now sounds like Barry White, though I couldn’t feel less like a Walrus of Love.

“This is definitely the roughest I’ve felt from any illness in my adult life, BUT, as I slowly come out the other side, coughing and spluttering. I’m still here – unlike so many millions around the world.”