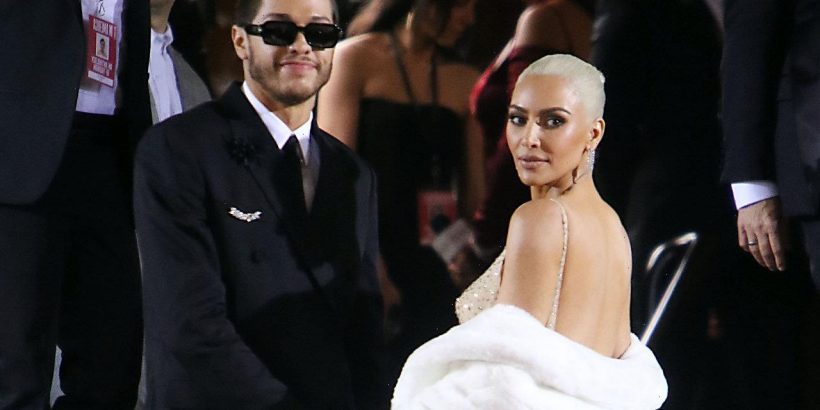 A new trailer of ‘The Kardashians’ also sees Khloe Kardashian talking about her love life as the famous clan addresses their legal issues with Blac Chyna who accused them of defamation.

AceShowbiz -“The Kardashians” unveiled its season 2 trailer on Monday, July 11. In the new video, fans were offered a look of what to expect in the second season of the Hulu reality show which follows the famous clan.

In the trailer, Kim Kardashian gushes over her romance with Pete Davidson. “Life is good,” she says, before adding, “I have a new boyfriend. I’m just having a really good time.”

In one scene, Kim is seen calling the “Saturday Night Live” alum over. “Babe, do you want to shower with me really quick?” she asks. Pete, who is talking with Khloe Kardashian, responds by throwing what he’s holding and running over to her.

That particular scene caught people’s attention. Amused, a fan wrote on Twitter, “say what you want but kim kardashian and pete davidson are so cute together.” Another person tweeted, “WHO COULD’VE SEEN THIS COMING: Pete Davidson drops everything to go shower with Kim Kardashian after being asked.” Meanwhile, someone called the scene “the best part.”

Elsewhere in the trailer, Khloe talks about her love life. “I do believe in love,” the Good American founder shares. “When you love, you know you’re alive. You have these feelings.”

Meanwhile, Kylie Jenner is seen preparing for the arrival of her and Travis Scott (II)‘s second child together. As for Kendall Jenner, she can be seen strutting down the runway. On the other hand, Kourtney Kardashian is busy gearing up for her wedding to Travis Barker.

The trailer also gives a glimpse of emotional moments of the family’s lives. In one scene, momager Kris Jenner lays on a hospital bed as boyfriend Corey Gamble gives her a kiss. “I can’t tell my kids, I’m scared,” she divulges. “They have enough problems. They don’t need to worry about mom.”

The family also addresses Blac Chyna‘s lawsuit against them. “She’s suing us for over $100 million and we’re leaving our fate in the hands of 12 random people. What if they hate us?” Khloe questions. The jury ultimately found them not guilty this May.

Season 2 of “The Kardashians” is set to premiere on Hulu on September 22.