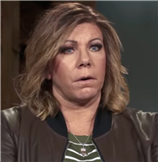 Another on the way?

As you likely know by now, Christine Brown shook up the Sister Wives universe on November 2 when she announced she was walking away from Kody Brown after more than two decades as his spiritual spouse.

“After more than 25 years together, Kody and I have grown apart and I have made the difficult decision to leave,” the mother of six wrote on Instagram.

“We will continue to be a strong presence in each other’s lives as we parent our beautiful children and support our wonderful family.

“At this time, we ask for your grace and kindness as we navigate through this stage within our family.”

For his part, Kody didn’t seem all that broken up about the break-up.

“Christine’s decision to leave comes with a great deal of sadness,” Kody he wrote on social media shortly after Christine drropped her bombshell, adding:

“We enjoyed many years together and I have a large amount of respect and admiration for her.

“Although we are moving forward on different paths, we will always remain committed parents.”

Based on this subdued reaction — and based on speculation over Kody’s desire to bring in a fresh face to his immediate family long before Christine moved back to Utah — many Sister Wives are now asking an obvious question:

When will Kody look to replace Christine?

It seems to be a foregone conclusion among those paying attention that Kody won’t move forward with only Meri, Janelle and Robyn serving his every whim.

Heck, on the Instagram account @withoutacrystalball, a thread popped up over the weekend that included this remark:

Who wants to bet Kody has another wife lined up?

Incredibly, Meri actually jumped in to the discussion, seemingly shooting down all chatter that another spouse was on the way.

Fans immediately flocked to this thread to:

Scroll down for a couple samle replies…

Reddit user #1: Why does Meri defend a man who has been so disrespectful to her???

Reddit user #2: I’m pretty sure Meri would be the last to know.

Reddit user #3: I’ve always thought he’ll dump all of them for Robyn.

On the latest episode of Sister Wives, which was filmed many months ago, Meri spoke with Kody about Christine’s unhappiness.

While saying she felt badly for her fellow spouse, Meri acknowledged some of the challenges she recently faced with Kody.

She even acknowledged some of the criticism that has come her way, telling viewers that she has remained with her husband due to…

“So a few months ago, Kody and I had our 30th anniversary. I’ve had a lot of people say to me, ‘Why are you still there? He clearly doesn’t love you,” Meri said in a confessional.

“‘You’re just brainwashed. … You’re just doing this because you think it’s what’s going to get you to heaven. Why do you stay?'”

“Well, because it’s my family. Because I have a confirmation from God that this is where I am meant to be.

“This is a very conscious choice that I’m making.”