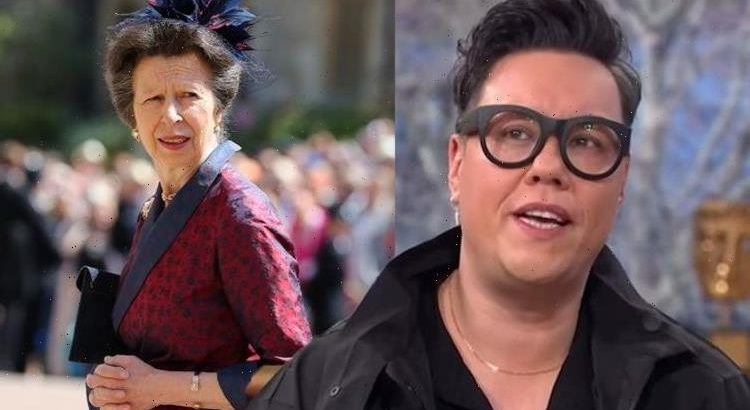 Holly Willoughby swears at Gok Wan on set of This Morning

Gok Wan, 47, revealed his MBE had been delayed after he came down with the “awful” super cold that has been going around since the temperatures dropped in the UK. The Bling host had been excitedly anticipating meeting Princess Anne at Windsor Palace last month, before he got struck down with the illness.

The TV presenter was due to receive an MBE on October 12 for services to fashion and social awareness from the Princess Royal at the Queen’s Berkshire palace.

The day before he was due to be awarded with the honour, he tweeted: “Wide awake (cos I passed out on the sofa at 9.50pm)… so I’m ordering Christmas decorations for my panto dressing room.

“Anyone else feeling a little topsy turvy? Just me? OK.”(sic)

A spokeswoman for Gok confirmed he was ill and was left “devastated” that he could not go to the ceremony as he “really wanted to go”.

She told the PA news agency: “He’s got a chest infection. He didn’t want to share his germs so he’s rescheduled it. The only reason is he didn’t feel 100 per cent.

“He kept testing for Covid, he doesn’t have Covid but didn’t want to share his germs.”

The How To Look Good Naked star was due to be honoured alongside Grand National-winning jockey Bob Champion, who has been made a CBE in recognition of his charitable services to prostate and testicular cancer research.

Speaking of his disappointment over missing out on the ceremony, Gok told Express.co.uk: “Yes, I was supposed to get my MBE a couple of weeks ago, but unfortunately, I had that awful cold.

“Oh my god, it is awful. Yeah, we’ve got a new day and it’s gonna be around November time, I should be going to get my MBE.”

Gok shared he is looking forward to receiving the honour, but is slightly “nervous” about it.

He continued: “Yeah, I’m excited. I’m a bit nervous. I feel very humbled by it. You know, it’s such an amazing award, it’s such a huge thing.

“I’m still very much the scared young boy trying to find his way. And I know I’ve done a lot of work, I’ve seen the world and I’ve done lots of different jobs and worked with incredible people and worked on amazing projects and stuff. But yeah, it still feels very strange. Very odd,” he added.

Gok has been impressing audiences in his warm-hearted show Bling, which sees excited couples seeking that perfect engagement ring, selling a hidden gem such as a delicate pocket watch, or even fixing a much-loved family treasure, and sometimes creating a one-off bespoke item.

However, the much-loved TV presenter has shared his doubts over taking on his new role, as he was unsure if he was “the right person for it”, due to his inexperience with jewellery.

Speaking on his decision to step out of his comfort zone and front Bling, Gok said: “It’s a lovely show, I loved making it, a really incredible team. Lovely contributors, the most beautiful stories… but I was a little bit concerned when they first offered me the show whether I was the right person for it.”

“But I didn’t know that much about jewellery until I took the job and then we did the first day filming and it just made sense. I loved it.

“The stories behind every piece that came into the shop, and the amazing journey of some of the pieces were just fascinating. It was a lovely show to make,” he added.

Gok is excited to see what the show can bring to those who use the Bling store.

The show focuses on the store, which is based in Exeter, and is dedicated to the process of jewellery.

It delves into the dazzling world of jewellery and beyond, from buying and selling to making and fixing eye-catching pieces.