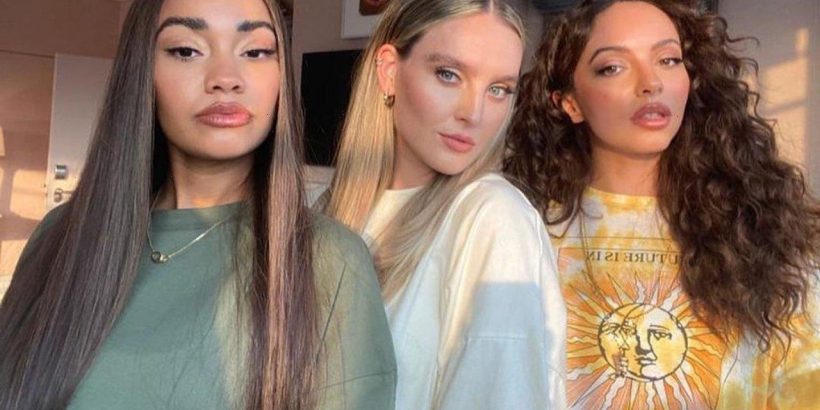 When appearing on the ‘Table Manners with Jessie and Lennie Ware’ podcast, the ‘DNA’ singer admits to have seen Leigh-Anne Pinnock’s twins, but has not have the chance to see Perrie Edwards’ baby.

AceShowbiz –Jade Thirlwall is giving her Little Mix bandmates some space as they enjoy the first few months of motherhood.

Perrie Edwards and Leigh-Anne Pinnock both gave birth in August 2021, and Jade admits she’s happy to keep a little distance between the new mums, so they don’t feel pressured to get back to work.

“I’ve seen Leigh’s bubbas so far, she’s got twins,” Jade coos. “It was quite obvious to us, because she is so tiny, like she had this big belly. I felt to us it was obvious she was having twins.”

“I went to see them not so long ago, and they’re beautiful. I haven’t seen Perrie’s yet, I’m going to go and see her soon. I wanted to give them a bit of space, because we are literally sisters and obsessed with each other.”

Jade thinks it’s important that her bandmates are able to enjoy some quality time with their newborns, telling the “Table Manners with Jessie and Lennie Ware” podcast, “I didn’t want to intrude, or remind them of work, too soon. So, I’ve given them a bit of time. It’s very strange seeing them as mams, because I always see us as kids, still. I don’t know why.”

On how she viewed herself after her bandmates embraced motherhood, the 28-year-old said, “Well, I’m the fabulous rich auntie, is the title I think.”

Though busy preparing for the group’s upcoming release of their greatest hits album “Between Us “, Jade noted that she is happy. “I’m happy to, because I’d hate to be at home twiddling me thumbs, I like being busy, I like working,” she explained. “So, I’m more than happy to do it while they’re resting up. Well, not resting.”