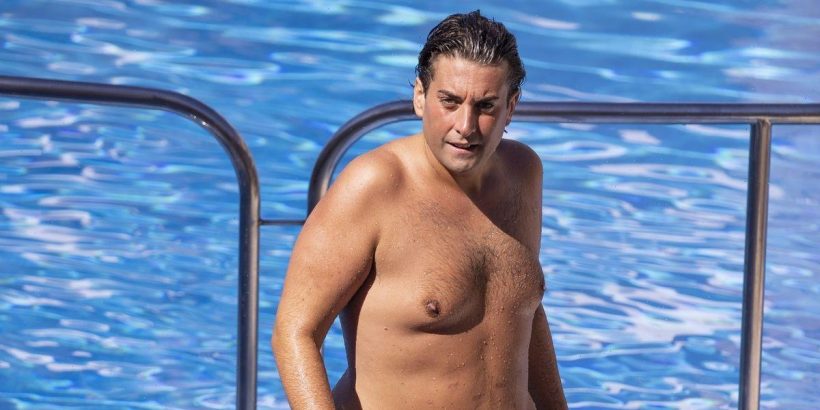 Former TOWIE star James Argent, 33, looked slimmer than ever as he took a dip in the pool while he enjoyed a holiday in Spain.

The star has lost a total of seven stone so far after undergoing a lifesaving weight loss operation earlier in the year.

James was spotted enjoying the last of the summer sun after jetting off to Mijas at the beginning of the season.

He looked happy and healthy as he walked round the pool in some lemon printed swimming shorts.

He also paired his look with some bright red and yellow sliders and a silver watch, while his wet hair was slicked back.

As temperatures soared in sunny Spain, James cooled down by having a dip in the swimming pool.

James has been a keen swimmer in the past and it seems that he has kept up with his hobby as he looked like a natural in the water as he laid back and topped up his tan.

James has been undergoing a transformation in recent months following his intensive gastric sleeve surgery.

Back in April of this year, James underwent a lifesaving weight loss surgery after his weight hit nearly 27 stone during the coronavirus lockdown.

His drink and drug addiction soon became a junk food addiction when Covid meant that pools and gyms had to close, but this ended up in doctors saying Arg could end up dying if he didn't do something about his weight.

In a post to Instagram back in April, Arg proudly shared: “Today Is the First Day of the Rest of My Life. My weight loss journey has STARTED.

“I’ve had my gastric sleeve surgery with the incredible team at @wearetransform. I’ve struggled with my weight for years but I'm finally ready both physically & mentally to do something about it.

“The next few months are going to be tough but I’m determined to reclaim my life! NEW CHAPTER.”

Speaking to The Sun just a couple of days after his operation, James said: "This is the biggest operation I’ve ever had in my life, so I was scared. "I did say to the surgeon, ‘Is there a chance I might not wake up?’ He said there was a small chance."

Despite his impressive weight loss so far, James said that he doesn't want to stop here as he wants to half his original body weight and drop to 14 stone.

Last month he performed at his friend Elliot Wright's restaurant Olivia's in Marbella.

The restaurant reopened just 12 weeks after a fire broke out, which came not long after Elliot's dad sadly died of Covid.

James filmed at Olivia's La Cala, which has rebranded and now includes a Turkish eatery on the top floor.

He said: "Ladies and gentlemen I am back in Olivia's La Cala. Got the funnyman Elliot Wright in his new Turkish restaurant Anka Kuşu."