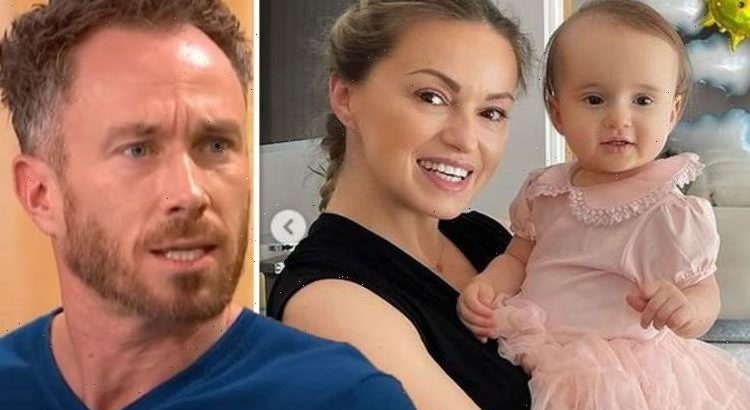 Former Strictly Come Dancing pro James Jordan has candidly admitted that he’s “struggling” with returning to work alongside his wife of 18 years, for the first time since welcoming daughter Ella last February. Taking to Instagram today, James, 43, said that he’s “nervous and upset” leaving his one and a half year old at home, while travelling to work with Ola, 39, despite knowing that she’ll be fine.

I’m struggling with the whole thing

In view of his 235,000 followers, the dance star revealed that he and his wife were working together for the first time in over a year.

Sitting in the back of a taxi next to Ola, the star shared that they both faced an early start.

James said: “So myself and Ola are both on our way to London.

“It’s the first time we’ve worked with each other since having Ella and I don’t know who is more upset and nervous between us and Ella.”

Chipping in, Ola replied: “I think you are.”

Agreeing, James said: “I think I am in particular, I’m not going to lie.

“I mean, everyone thinks I have this tough exterior, but I’m struggling with the whole thing,” James candidly admitted.

The dancer went on to say that he found it tough leaving her despite knowing that she’ll be fine.

“Leaving her, yeah I’m just really worried and anxious, so fingers crossed she’s going to be OK, I’m sure she will,” he ended the story.

In the next clip, James and Ola had arrived in London and were navigating the city’s busy streets in their taxi before arriving at the destination.

However, the star took to his stories to voice his annoyance over the amount of cyclists who were on the road in rush hour.

“Which is a wonderful thing if you’re a cyclist, but none of the f***ers use them!” James ranted.

“They’re just like annoying things that go through the red light – they’re a rule unto themselves!” he fumed.

“Use the cycle lanes you muppets!” James while ending his story.

James and Ola welcomed their daughter Ella in February 2020.

Earlier this month, he shared a sweet tribute to his wife on their 18-year wedding anniversary.

Alongside a snap of them on their wedding day, he wrote: “She has to be the luckiest girl in the world – to be married to me for 18 years today.

“It’s what you were all thinking but I just said it. Anyway @olajordan I love you.”