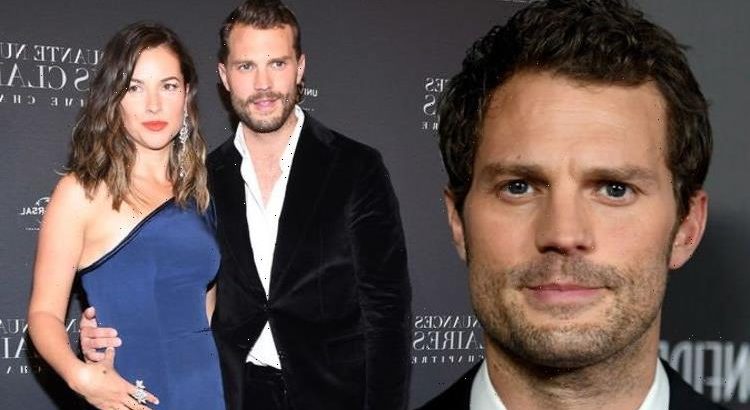 Jamie Dornan, 39, has been married to wife Amelia Warner since 2013 and the couple share three daughters. The actor has revealed in a new interview that he rarely spends time away from his family but when he does, he has a two-week rule – which he “broke”.

Although I broke it last week.

Whilst filming a show recently, to stay with his children and wife, Jamie took them with him to South Australia.

Speaking to Radio Times, Jamie said: “I’m not going away from my family. I have a two-week rule.

“Although I broke it last week because I ended up having to stay in LA longer than I thought.

“For The Tourist, they came with me for every step of it. My kids went to school. It was marvellous.

“It was our eldest daughter’s eighth birthday recently, and she spent an hour and a half on Zoom with her Aussie mates at 8am.”

Jamie met his wife Amelia in 2010, with him previously telling the Belfast Telegraph: “I was smitten with her from the start, I really was.

“I’m more in love with her today than I was at the start.”

The pair got engaged in 2012 before marrying the following year.

The actor has previously also opened up about the difficult parts of his marriage.

Speaking to the Sunday Times Magazine, he said: “We get frustrated at times, usually when travelling with the kids, but we’d never let anything boil and become a thing.

“We know couples who are plate-throwers, but that’s just not us. I’m glad it’s not us – plates are expensive…”

Jamie recently talked to publication to share his “hurt” that his beloved late father would not be able to see him in his latest film, Belfast.

Earlier this year renowned obstetrician and gynaecologist Professor Jim Dornan died aged 73, after being admitted to a hospital in Dubai for routine knee surgery before testing positive for COVID-19.

The 50 Shades of Grey actor said his father had always been supportive of his career choices and attributes a lot of his success to him.

Jamie said: “It’s been a brutal aspect of this whole journey. For my dad not to be able to see this movie hurts.

“I take comfort in the fact that he knows I did it. He was so invested in my career. Some people go their whole lives without being told, ‘You’ve made your parents proud’.

“My dad would tell me every day.”

Jamie is probably best known for his role as Christian Grey in the Fifty Shades trilogy, however, he earned international recognition for playing serial killer Paul Spector in BBC crime series The Fall.

His most recent film Belfast centres on a young boy’s childhood amidst the tumult of Belfast in the 1960s.

You can read Jamie Dornan’s full interview in the Radio Times here.