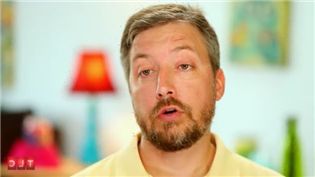 This week, 90 Day Fiance alum Jason Hitch passed away from complications due to COVID-19.

It was his sister, Shannon, who first shared this heartbreaking news.

She knew that her brother is remembered by millions of viewers, as well as his former castmates.

Now, those 90 Day Fiance stars are speaking out and mourning Jason’s death. He was only 45.

“He will be missed by his family and many friends and fans whom he adored,” Shannon told In Touch Weekly.

She had previously spoken to TMZ, which is how she broke the news that he passed away on Tuesday, December 14.

Jason had been in the UCU of a Florida hospital. He was unvaccinated and had no known preexisting conditions.

Numerous bloggers, including Frauded and John Yates, were among the first to acknowledge his passing.

To them, Jason was more than just a reality star — he played a role in their stories, too.

At a time when 90 Day Fiance was really just getting off of the ground, he gave interviews on social media, helping them to get their starts.

Of course, many wondered how Jason’s ex was feeling, and whether she learned the news before it became news.

Cassia Tavares and Jason divorced in 2018, following multiple divorce filings and, at one point, Jason’s arrest on suspicion of domestic violence.

Everyone is entitled to have complicated feelings about a deceased ex, and Cassia is no exception.

“It’s always sad when someone you spent part of your life with stops breathing,” a stunned Cassia wrote on her Instagram Stories.

She continued: “I guess one could never be prepared for that. I wasn’t today.”

Cassia confirmed that she had not received prior warning before the news broke, and expressed her sincere condolences to Jason’s family.

Cassia has since remarried, announcing this news in February of 2021.

The nuptials took place in an Italian courthouse. Cassia was originally Brazilian.

She and Jason had both had a long time to move on. We hope that they both made the most of it.

Danielle Mullins Jbali has long been credited for, alongside ex-husband Mohamed Jbali, “putting 90 Day Fiance on the map.”

They were not alone in their unforgettable drama on Season 2.

Following the grim news about Jason, she took to Instagram to publicly mourn him and remind longtime fans that they had been castmates.

Nicole Nafziger did not know Jason in that way, but also posted a message to his family for a very Nicole reason.

After a piece of clickbait was posted on her social media, she once again apologized for misleading her followers.

She did not personally post the message that exploited Jason’s death for a link on social media, and she was sorry that it happened.

To her credit, Nicole also took the extra step of posting the apology and also apologizing to Cassia and to Jason’s family.

Multiple fans and bloggers acknowledged that Nicole herself would never have done this.