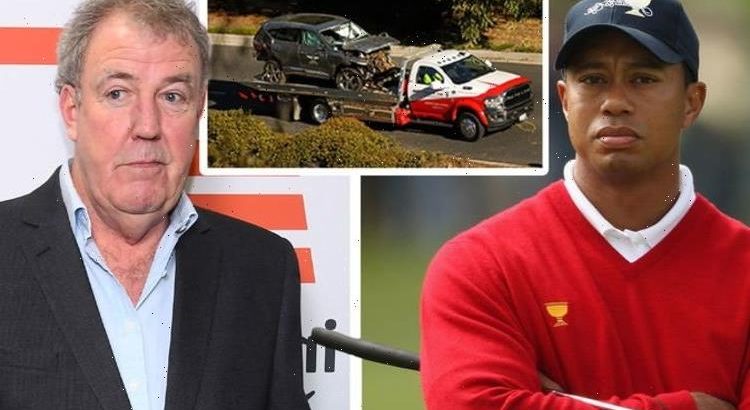 Jeremy Clarkson, 61, has seen his fair share of horror crashes, having worked on Top Gear for most of his adult life and then The Grand Tour. So when golfing legend Tiger Woods made headlines following his terrifying accident back in February, he wanted to analyse the details.

The crash took place in LA just a day after Woods was in the area to host the annual Genesis Invitational at the Riviera Country Club.

But after reading about what happened, Jeremy was a little sceptical.

Writing in his column for The Times, the presenter admitted he “never really understood” the enormous car crash.

“Sure, police say he was driving at more than 80mph when he lost control, but it was a wide road,” he penned.

“He’s a thrusting young man with a thriving pant compass and a sharp mind so the speed shouldn’t have been a factor.

“What’s more relevant is that he hit the central reservation and careered across the road before hitting a tree at what experts say was 75mph.

“So he obviously hadn’t braked very hard in the meantime.”

He added: “Then he rolled over several times before emerging from the wreckage with nothing more than a hurty leg.

Despite Jezza’s opinions, Woods suffered a little more than a “hurty leg”.

As a result of the accident, the golfing great went on to suffer severe injuries that included “open fractures affecting the upper and lower of the tibia and fibula bones”.

He also had to undergo extensive surgery on his right leg.

Elsewhere, Jeremy came under fire for his latest comments on Greta Thunberg., which sparked outrage.

The TV star branded the 18-year-old climate activist, who attended the COP26 conference last week, an “annoying little bucket of ego” and “a pest”, before adding that she “needed a smacked bottom”.

“She has no knowledge of how the world works, no manners and no letters after her name because instead of going to school, she’s been busy sailing round the world so she can be mardy and abusive to grown-ups.

“What she needs is a smacked bottom,” he added to The Sunday Times in his latest column.

But the Diddly Squat farm owner’s comments have since sparked outrage on social media, with some branding his words inappropriate.