The only people to come out of this occasion very well were, appropriately, the happy couple themselves.

Princess Eugenie inspired some sympathy – for surviving her parents as much as the back operation and scoliosis she’d endured as a child, while everyone agreed Jack Brooksbank was ‘a good egg.’ (In fact his headmaster at Stowe had always said he was the sort of chap who would be ‘invaluable in a shipwreck.’) 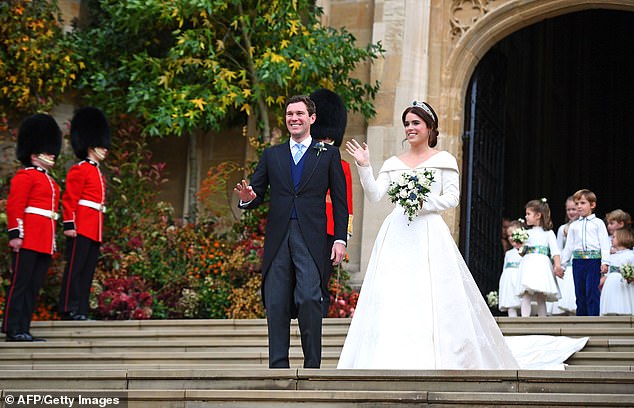 The way Brooksbank had no compunction about standing at the altar and putting his glasses on to admire the sight of his bride walking down the aisle was certainly rather dashing.

Your abiding impression was that they were pretty decent and hadn’t been done any favours by the decision to broadcast their wedding live at a cost of £2million to the public and some unseemly treatment towards any homeless people in the area.

Virtually everyone else lived up – or down – to expectation.

Perennial show-offs like Robbie Williams and Cara Delevingne tried to upstage the bride and groom while Prince Andrew and Sarah Ferguson were predictably embarrassing.

How hard they had pushed for their daughter’s big day to be promoted on a grander scale wasn’t clear.

‘This will not be the same as the previous one that was held in May,’ Andrew insisted, referring to Harry and Megan’s state occasion. ‘It’s not a public wedding. This is meant to be a family wedding.’

It was live on ITV after all.

Unfortunately (for Eugenie and Jack, rather than us), it wasn’t done properly either way.

Like most hastily arranged sequels ‘Royal Wedding 2’, as it was labelled on social media, looked like a badly-conceived, pale, imitation of its predecessor. 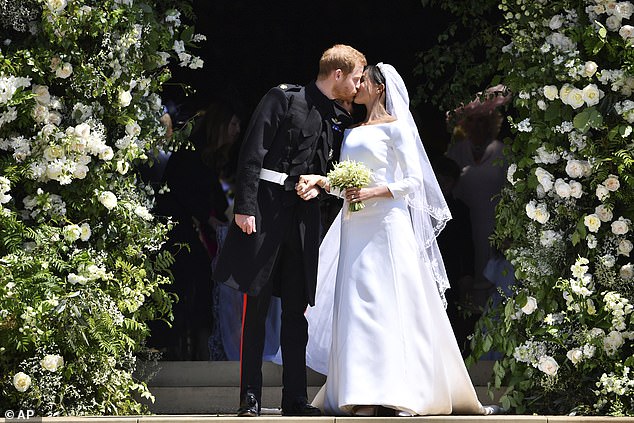 The lack of crowds as Eugenie drove to the Chapel made a stark contrast to the masses cheering Megan and the most memorable moments were arguably provided the ‘PDA’ between the Duke & Duchess of Cambridge and the mischievous antics of their children George and Charlotte.

The weddings of William & Kate and Harry & Megan had, of course, been covered by the BBC, not This Morning.

Here the pompous gravitas of Huw Edwards was replaced by the fawning Eamonn Holmes and Ruth Langsford’s mindless wittering whose excitement at witnessing the previous day’s rehearsal (with ‘stand-ins’ filling in for the bride and groom) summed up how inferior the occasion was overall. 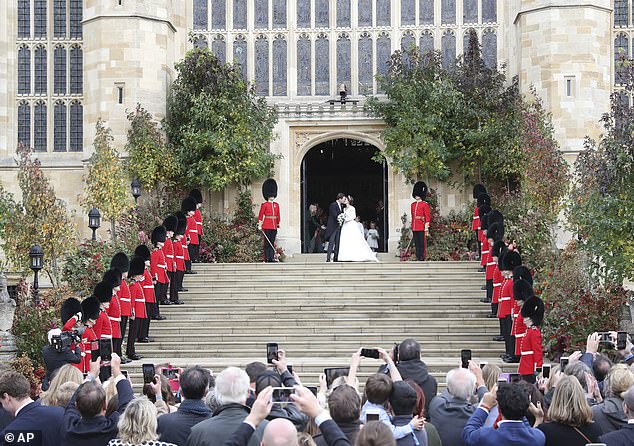 At the beginning of the day the crowds had been sparse, but they then came out in full force after the couple tied the knot

Some of the coverage bordered on surreal.

Eamonn and Ruth boasted that their ‘exclusive’ chat with the happy couple had taken place at Buckingham Palace but then looked decidedly makeshift.

All four of them were standing up in the centre of the room, like spare parts making small talk at a bog-standard wedding reception. 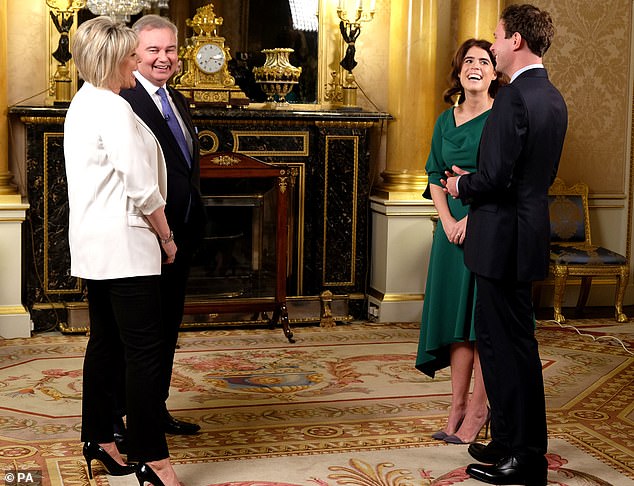 As bad as it must have been for a 12 year-old Eugenie’s ordeal seemed somewhat overblown when we learnt that her operation had a ‘low complication rate’ and no major after-effects.

‘You can change the way beauty is!’ she claimed nonetheless, about the way she had embraced and publicised her scars.

The much-vaunted ‘interview’ with Prince Andrew was even worse and more a heavily-edited, jaunty, series of soundbites than an interview. 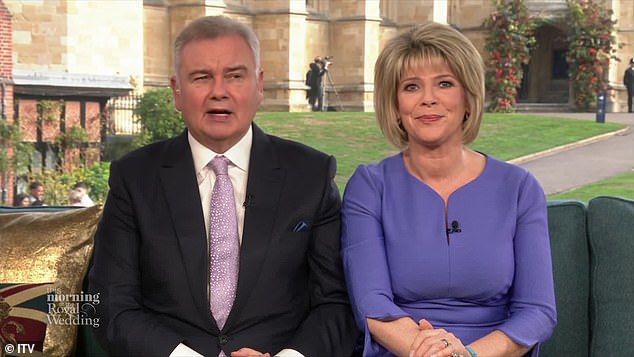 ‘I don’t write speeches! Why should I write this one?!’ he declared cheerfully sounding look like a contestant on The X Factor. ‘Mine is a very small role! I just have to walk slowly!’

In fact ITV’s coverage generally made what already seemed a confusing event only less impressive and more bizarre. 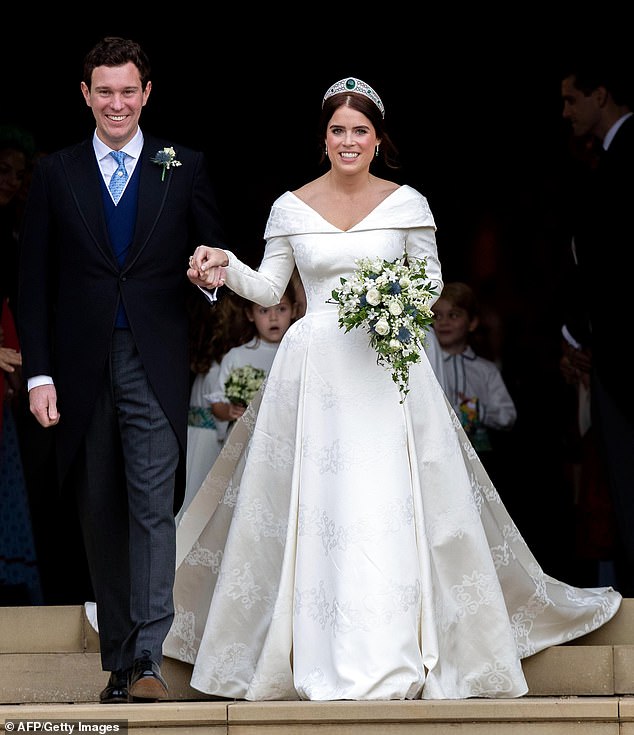 Why the happy couple getting married on a Friday – rather than a Saturday, not just like other Royals but as even the most common plebs do?

We learnt that the bride had ‘a delicate balancing act between her career and her royal duties’ but not specifically what she actually did all day or whether her job was harder or easier than being ‘a tequila ambassador’ like her husband?

And how do you pronounce ‘Eugenie’? 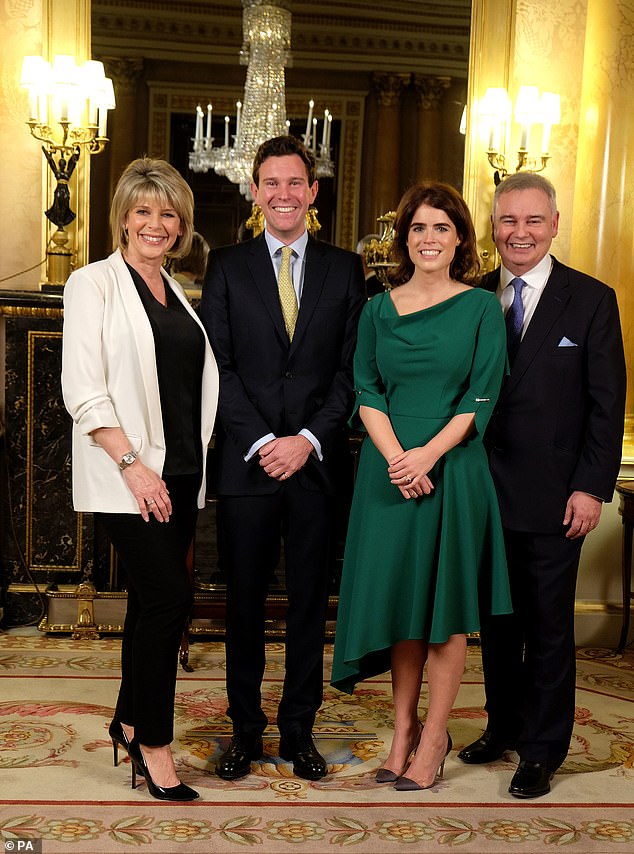 Even this never became clear.

The various presenters said it six or seven different way and they’d been practising, while even the Monarchy fanatic who runs Britain’s only royal memorabilia museum wasn’t sure.

Alison Hammond had introduced Anita Atkinson, typically articulately, as ‘the most biggest royalist ever’ but she wasn’t much help with the bridegroom either.

‘I don’t know much about Jack,’ she smiled.

If she wasn’t that bothered it was hard to see why we should be.

Reporting from the streets of Windsor, Lisa Snowden quizzed the man responsible for the floral displays and ‘foliage’ as earnestly as if she were grilling the Prime Minister. 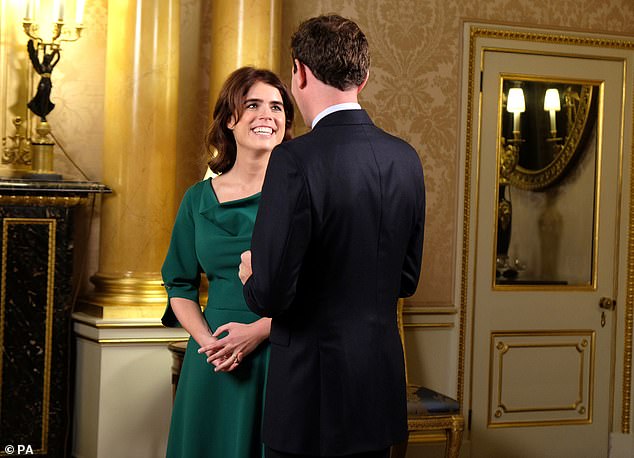 Ruth Langsford was very touched by Eugenia inviting fellow scoliosis suffered Julia Carlile (a young dancer in Britain’s Got Talent entrants the MerseyGirls, whose treatment had been funded by Simon Cowell).

But clearly never considered that the public’s £2million contribution could have gone towards operations for other kids like Julia.

Eamonn’s contributions meanwhile were, appropriately, mostly about wind – specifically the difficulties various women had holding on to their hats (or not).

‘Watch what happens!’ he chortled.

His insights into the plethora of minor celebrities was also surprisingly limited.

‘Is that Kate Moss’ daughter?’ he wondered. ‘Who knows?’

Well you were meant to…

‘I saw the top of Kate Moss’s head there!’ he offered later, just before the service began.

As metaphors for royal occasions go, unfortunately it summed the calibre of this one up perfectly.