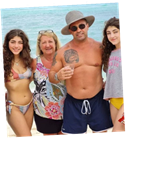 Joe Giudice is living his best life these days.

As best he can, that is.

For an ex-convict who was deported from the country in which he previously lived for a significant majority of his life.

The former Real Housewives of New Jersey star just spent several fun days in the sun with his daughters, chronicling the experience on social media.

“Nothing like family,” Joe wrote as a caption to the snapshot above, which features himself, his mother and two of his children, Audriana and Milania.

After getting sent back to Italy in 2019, following a lengthy stint in prison after pleading guilty to bankruptcy fraud, Joe has seemingly settled down in the Bahamas for a bit.

This has been confirmed by none other than his ex-wife.

“He’s living in the Bahamas right now and I know he’s going to be fighting. He’s doing a celebrity fight,” Teresa Giudice told Extra last month of her former spouse, who is scheduled to compete in a Celebrity Boxing match.

The father of four has been posting videos on his Instagram account to keep followers apprised of just how he’s getting in shape.

“A bunch of us are going to go,” Teresa of of this upcoming bout, which TMZ reported last year would pit Joe against Jennifer Lopez’s ex-husband Ojani Noa.

“A lot of girls I know — Dolores [Catania] wants to go, Jennifer [Aydin] want to go… If I’m not working, I’m definitely going to be there.”

On the latest Real Housewives of New Jersey episode, for example, Joe and Teresa talked on the phone, with the latter even remarking on how easy their divorce process has been.

From what we can gather, Joe last saw daughters Gia and Milania  in Italy this past November, when they also got to meet his new girlfriend, Daniela Fittipaldi.

He hadn’t seen all four kids in one place, however, since they flew across the Atlantic Ocean to Italy in December of 2019.

All things considered, Joe appears to be doing pretty darn well at the moment.

As cited above, he’s somehow found a woman who wants to sleep with him, while there’s also been chatter about a Joe Giudice reality show.

Joe also says he has no hard feelings about Teresa finding a new lover.

“What’s she going to do, stay alone forever? That’s not fair, as well,” Giudice said in October.

“Maybe we’d still be in the same situation, maybe not. I don’t know. Things change after so many years.”