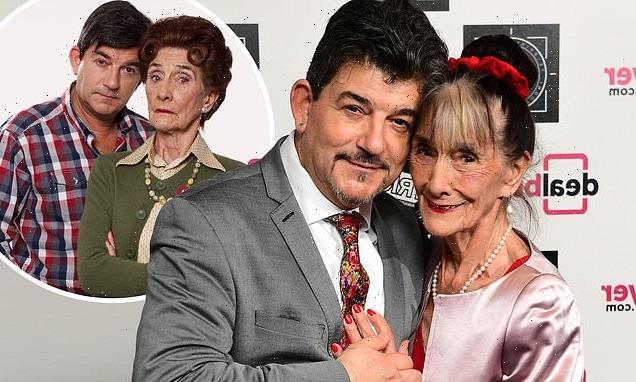 June Brown’s onscreen EastEnders son John Altman has revealed that he will always feel ‘indebted’ to her after she saved his daughter Rosanna from drowning.

The actor, 70, said he gets ’emotional’ thinking about how the soap star, who died last week aged 95, saved his daughter’s life when she was six years old.

He told The Mirror that his family and June had travelled to Gibraltar in 1992 for a charity cricket tournament and were relaxing by the pool at the Rock Hotel. 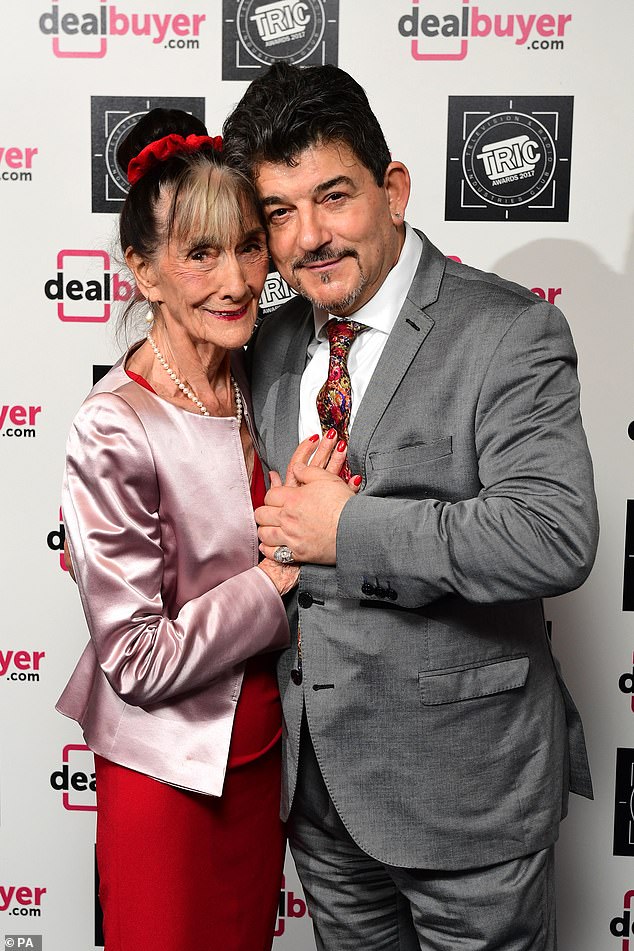 Heroic: June Brown’s onscreen EastEnders son John Altman (pictured in 2017) has revealed that he will always feel ‘indebted’ to her after she saved his daughter Rosanna from drowning

John, who played June’s villainous son Nick on a semi-regular basis from 1985 until his onscreen death in February 2015, said he warned Rosanna not to run beside the pool with a large towel wrapped around her, as he was worried she might trip over.

He said Rosanna assured him that she would be careful and he continued to chat with other guests as he sat on a table until June alerted him that his daughter had fallen in the pool.

Recounting incident, he said: ‘We were interrupted by a splash and June, who was facing the pool, said, “I think that was Rosanna, dear”. I leapt to my feet, Rosanna was nowhere to be seen.’

The father-of-one explained that Rosanna had sunk to the bottom of the pool, saying he managed to rescue her safe and sound and thanked June for her intervention. 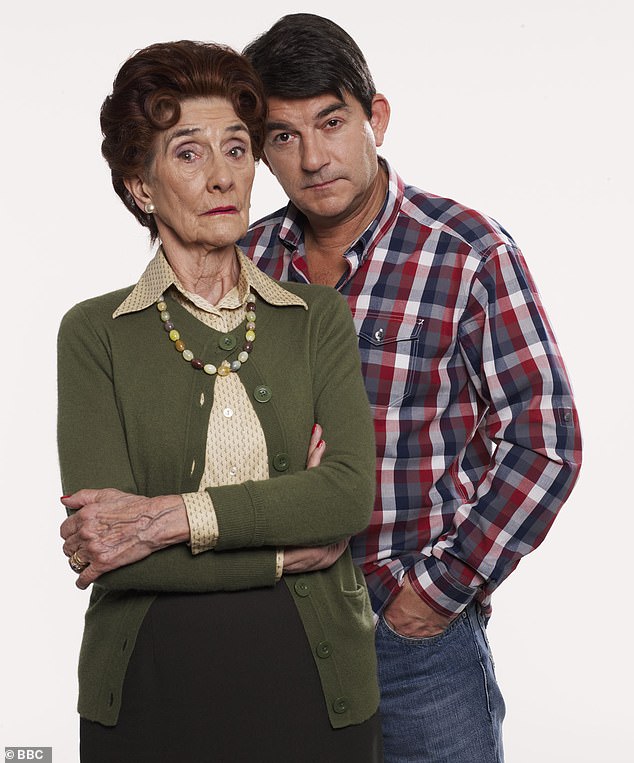 Co-stars: The actor, 70, said he gets ’emotional’ thinking about how the soap star, who died last week aged 95, saved his daughter from drowning in a pool when she was six years old

June passed away peacefully at home on Sunday, after becoming a household name as chain-smoking Dot Cotton on EastEnders.

John shares his daughter with his ex-wife Bridget Poodhun, who he parted ways with in 1997 after 11 years of marriage. Rosanna has a seven-year-old daughter Lily.

John admitted he almost started a romance with June’s daughter Louise, who has since married, nearly becoming his EastEnder’s co-stars real-life family.

He said he thought Louise, now 63, was very attractive when they first met but said he was in the early days of dating Bridget at the time so did not pursue any romance. 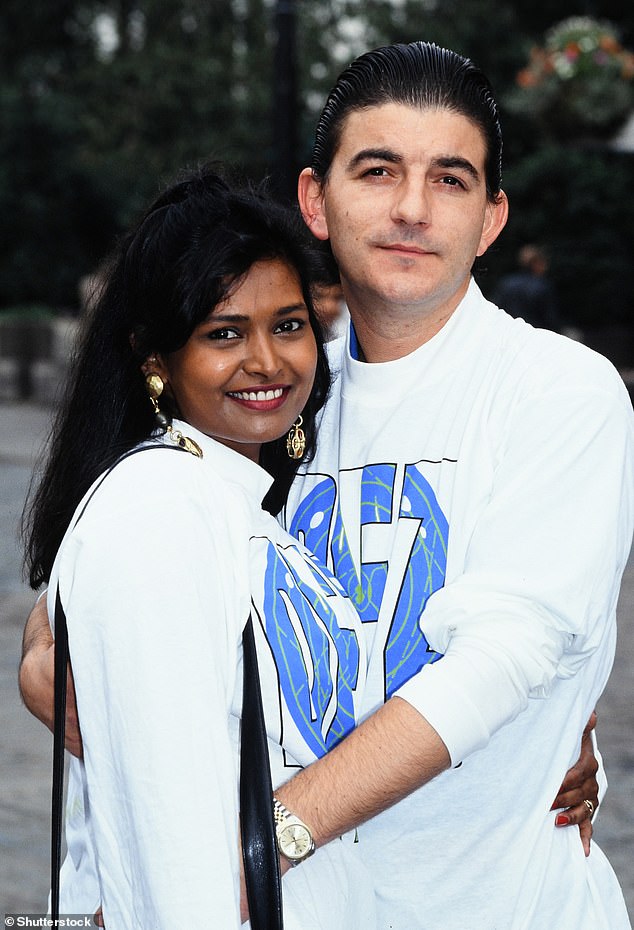 Family: John shares his daughter with his ex-wife Bridget Poodhun (both pictured in 1990), who he parted ways with in 1997 after 11 years of marriage

Paying tribute to soap icon June, John also reflected on visiting her on February 19, soon after her 95th birthday, saying he felt ‘grateful’ to be among the select visitors that June asked to see.

He said they hugged and said their goodbyes in the emotional meeting, where June touchingly told him that she never would have joined EastEnders if it wasn’t for him.

‘I kind of knew she was near the end of her life. I told her I loved her and held her warm, frail hand,’ he added.

He told hosts Richard Madeley and Kate Garraway: ‘She’s so kind. She used to say healing prayers; she was quite spiritual. She definitely believed in a higher power.’ 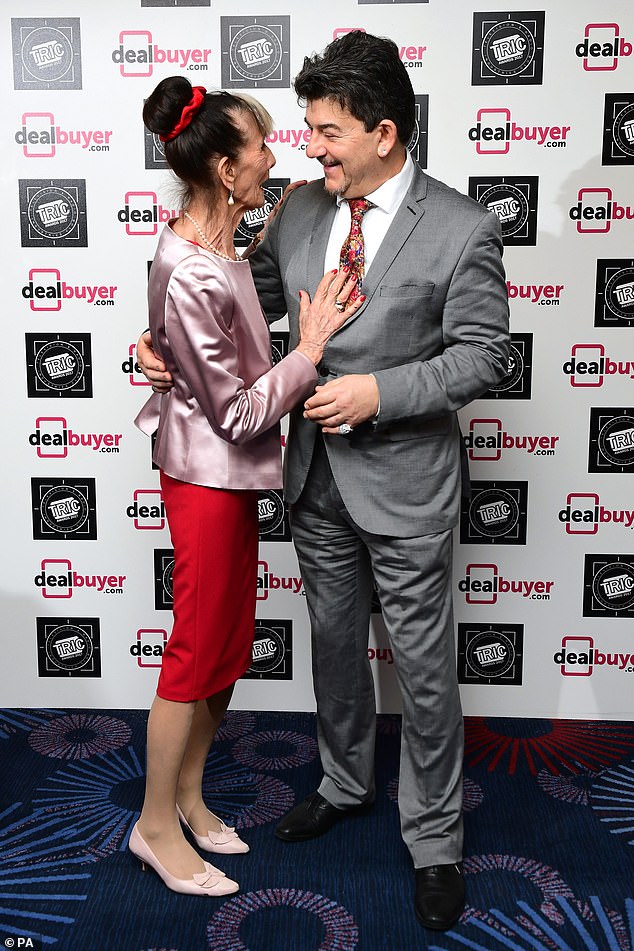 Emotional: John reflected on seeing June in February, saying they said their goodbyes while June touchingly told him that she never would have joined EastEnders if it wasn’t for him

John also revealed the pair would run lines in her dressing room while ‘having coffee and a few ciggies’, with June a ‘real stickler’ for the script being accurate.

‘[They were] treasured moments for me in my career, it was such a joy to work with her. She was older than me so she was more experienced – she’d guide me sometimes, say, “Slow down a bit on that, dear.”’

John went on to tell how he’d last seen June a month before her death: ‘She was tired. She’d slowed right down. I’d like to say, so much thanks and god bless her family who’ve been fantastic, rallying round her – they’ve taken great care of her.

‘She didn’t have to go into a home or anything. She spent her last days in her lovely home in the Surrey Hills.’

Richard and Kate asked John what he would miss the most about June, to which he provided a heartwarming answer: ‘She was a dear friend. Someone I could confide in, and probably my second mother, really. My real mother said she looked more like my mother than she did!’ 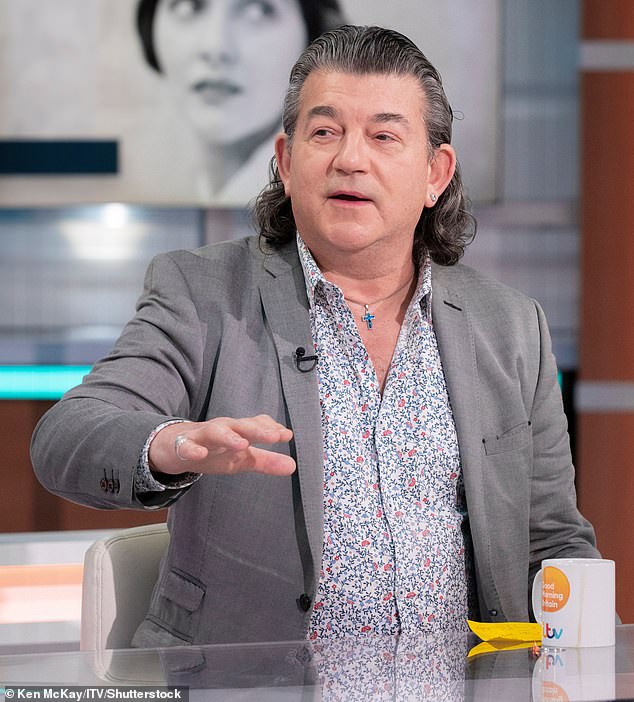 Tribute: Previously paying his respects to June, John described June as his ‘second mother’ as he appeared on Good Morning Britain just days after her death

June passed away on April 3 after playing Dot Cotton, the mother of John’s character Nick, on EastEnders – a role she played for 35 years before leaving in 2020.

For decades June was one of the most famous faces on British TV, playing the devout Christian famed on Albert Square for her chain smoking, gossiping and mothering of those in need.

Her relationship with her tearaway son Nasty Nick, John Altman, who she forgave and forgave for his crimes until she gave up on him and he died after consuming a bad batch of heroin bought for him by his very own mother in February 2015.

Her loving relationship with Jim Branning, played by John Bardon, would captivate millions, leaving fans in tears as she said goodbye to him following a stroke. 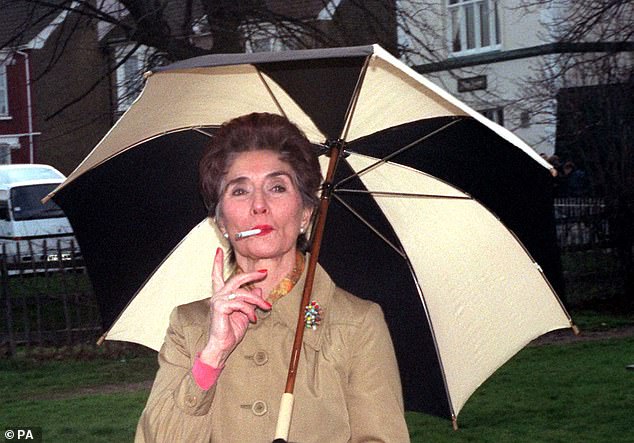 Icon: June passed away on April 3 after playing Dot Cotton, the mother of John’s character Nick, on EastEnders – a role she played for 35 years before leaving in 2020

June left the soap in January 2020, making her final appearance in a storyline where Dot came to believe that Martin Fowler had stolen money from her – which turned out to have actually been Sonia.

Confirming her death on Monday, an EastEnders spokesman said: ‘We are deeply saddened to announce that our beloved June Brown, OBE, MBE, sadly passed away last night.

‘There are not enough words to describe how much June was loved and adored by everyone at EastEnders, her loving warmth, wit and great humour will never be forgotten.’

The actress created one of the most iconic characters in Dot Cotton, not just in soap but in British television, and having appeared in 2,884 episodes, June’s remarkable performances created some of EastEnders’ finest moments,’ the statement concluded.