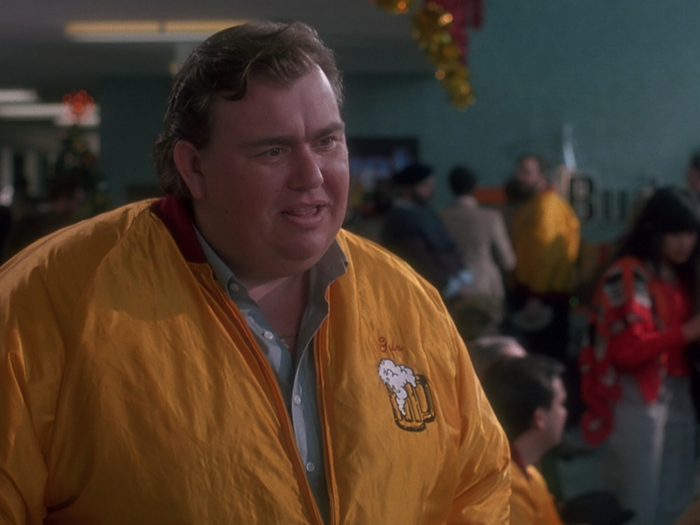 It doesn't matter how many times you watch it, one of the best moments in "Home Alone" is when John Candy suddenly appears.

Dressed in a big yellow bomber jacket he's hard to miss as he slowly walks into the shot where Catherine O'Hara, playing Kevin's mom Kate, is ripping into a ticket agent at the Scranton, Pennsylvania airport as she desperately tries to get back to her son in Chicago.

Candy, playing polka star Gus Polinski, cautiously interrupts and tells Kate that he can help her get to Chicago if she doesn't mind riding in a truck with him and his polka band.

The self-declared "Polka King of the Midwest" doesn't just move along the plot with his appearance, but adds a fantastic comedic element to a movie that's already filled with laughs.

The comic, who was already a huge star when "Home Alone" came out having starred in movies such as "Splash," "Spaceballs," and "Uncle Buck," was only on the movie's set for one day. But the lines he delivered were gold, and director Chris Columbus recalled that it was all improvised.

"None of that stuff was in the script," Columbus told Insider, as he looked back on the movie for its 30th anniversary this month.  "The funeral-parlor story, that was all improvised at 4:30 in the morning. We could barely keep a straight face on set just listening to John."

However, despite all the great material and being a big star, it turns out Candy didn't get a big payday for the cameo. Columbus said Candy did it as a favor to the movie's producer and screenwriter, John Hughes.

So how much did Candy get paid? According to Netflix's show "The Movies That Made Us," he only received $414.

"Home Alone," also starring Macaulay Culkin as a little boy who gets left home alone after his family rushes to spend Christmas in Paris, took home more than $476 million at the global box office.

"There was certainly a little resentment on John's part," Columbus said. "It was a deal between him and John Hughes at the time. I never met John Candy before he came on the movie. I don't know if John ever got any kind of compensation from Fox."

And Columbus remembers that even when the two did 1991's "Only the Lonely" together, Candy was still bitter about it.

"There were a couple times on set when he would make a cutting remark about Fox and what he was paid," Columbus said.

Candy would die three years later at the age of 43, but his work, especially in "Home Alone," has become timeless.