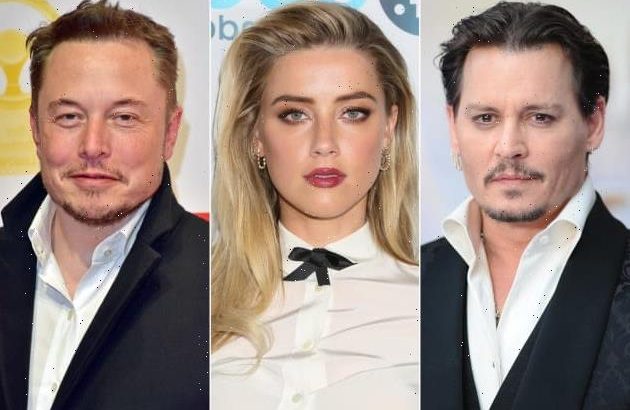 During her time on the stand last week, Heard testified about a rumor that she had heard about Depp pushing ex-girlfriend Kate Moss down a flight of stairs

The model told the court that Depp never shoved her down the stairs, nor did he abuse her at any time during their relationship.

“He never pushed me, kicked me or threw me down any kind of stairs,” Moss said.

“As I left the room, I slid down the stairs and I hurt my back,” she continued.

“And I screamed because I didn’t know what happened to me, and I was in pain. He came running back to help me and carried me to my room and got me medical attention.”

After Moss concluded her brief testimony, Depp took once again took the stand,

This time, he denied writing texts in which he appeared to fantasize about “thrashing her about like a pleading mackerel,” presumably referring to Heard.

Though he denied any responsibility for those words, Depp conceded that he was the author of a second round of angry texts which were presented to the court by Heard’s attorneys.

“She’s begging for total humiliation … She’s gonna get it,” the actor wrote.

“I have no mercy, no fear and not an ounce of emotion, or what I once thought was love for this gold digging, low level, dime a dozen, mushy, pointless dangling overused flappy fish market…

“I’m so f–king happy she wants to go to fight this out!!! She will hit the wall hard!!!” Depp went on in texts that were addressed to Heard’s former agent.

“And I cannot wait to have this waste of a c-m guzzler out of my life!!!

“I met a f–king sublime little Russian here… Which made me realize the time I blew on that 50 cent stripper… I wouldn’t touch her with a goddam glove,” Depp continued.

“I can only hope that karma kicks in and take the gift of breath from her… Sorry, man… But, NOW, I will stop at nothing!!! Let’s see if mollusk has a pair,” he added.

“Come see me face to face… I’ll show him things he’s never seen before… Like, the other side of his d–k when I slice it off.”

Asked by his own attorney what he was thinking when he wrote those texts, Depp revealed that they came from a place of blind rage.

“I’m in total shock that this is happening to me, that my entire life on the planet has been brought to the head of a pin with all this completely, utterly false information,” he told the court.

“When you’re accused of horrific acts and things that you have not done, when it’s actually some very ugly things that are going out there into the world about you a non-stop basis by Ms. Heard and her team, you have a tendency, as a human to get very, very irate and angry, not to the point where you go out and hurt someone, not even to the point where you assault a cabinet, but you do get irate, you do wonder why this person would do this to you,” Depp continued.

Depp went on to state that he was deeply concerned about how his family, including his two children, would react to the allegations.

“My mother, thankfully, didn’t get to read any of this, because it would have killed her,” Depp told the court.

“Everyone I’ve met, everyone who supported me suddenly thinks I’m scum. Never had to happen. One little lie. So yes, I’m very angry.”

Depp’s attorneys concluded their line of questioning with one simple, significant query:

“Mr. Depp, did you ever physically abuse Ms. Heard during your relationship?”

The Depp v. Heard defamation trial is set to wrap up on Friday with jury deliberation beginning shortly thereafter.

We’ll have further information about his developing story as new information becomes available.