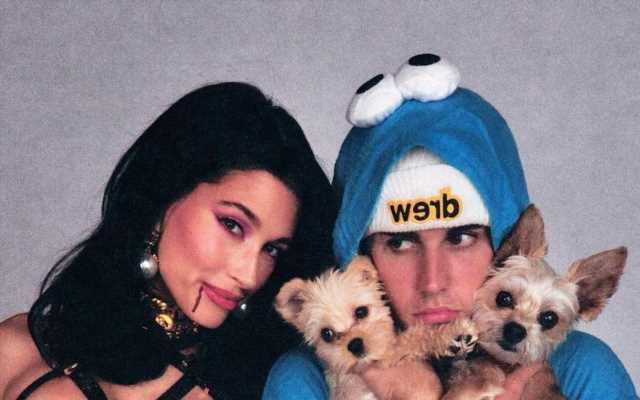 The ‘Yummy’ hitmaker and Hailey Baldwin have welcomed an adorable furry canine to their family as they celebrate spooky holiday as Cookie Monster and vampire respectively.

AceShowbiz -Justin and Hailey Bieber have brought home a new puppy. The loved up couple – who already brought pet pooch Oscar into the family in 2018 – introduced the latest adorable addition with a series of photos on social media this week.

Justin, 28, shared in a Halloween themed post a few professional pictures of himself dressed as the Cookie Monster from “Sesame Street” and his wife Hailey as a sultry vampire as they cradled their puppies.

The 25-year-old model also shared some photos of Piggy Lou on her own Instagram account. She wrote alongside one snap, “This is Oscar’s new baby sister Piggy Lou Bieber.”

The new addition to the family comes a few weeks after the pair celebrated their four year wedding anniversary, having secretly tied the knot in September 2018. Marking the occasion, Justin wrote, “Happy anniversary to my best friend and wifey @haileybieber .. thanks for making me better in every way.”

And Hailey added on her own post, “4 years married to you. The most beautiful human I’ve ever known… love of my life. Thank God for you.”

Meanwhile, over summer, Hailey admitted she and Justin put in a lot of “effort” to make their marriage work. She said, “He’s still the person that I wanna be rushing back to. I might fly somewhere and go do a job, but I can’t wait to come back and hang out.”

“And I feel like that’s because of the effort that’s been put in on both sides. At the end of the day, like, he’s my best friend, but it still does take a lot of work to make it work. And then I know, eventually, when kids come in the picture, that’s going to be a whole other season of navigating how to make that work.”