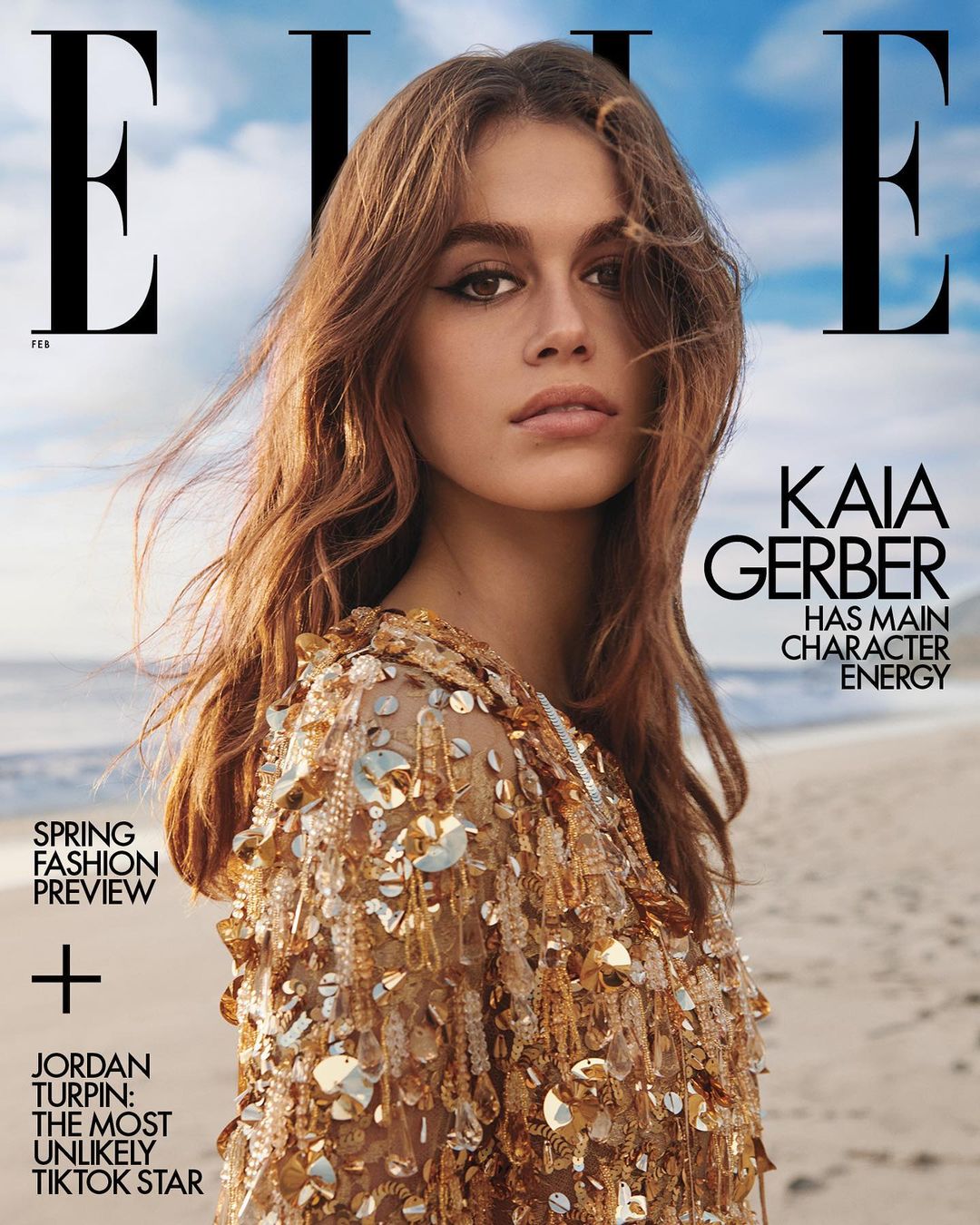 Kaia Gerber covers the February issue of Elle. The editorial is fine, albeit a bit undercooked? “Put a pretty model at the beach.” And that’s as far as they went. The interview is a bit more interesting – I haven’t read one of her interviews in a while, maybe a year or so? Back in the day, Kaia wasn’t really interesting enough to be the subject of an interview – she’s lived a life of (mostly unexamined) privilege, she had an extremely easy path into modeling and she’s barely had any struggles in her life. That’s still the case, but at least she’s more of a conversationalist now. She reads! She acts! She’s a comedy nerd! Some highlights from Elle:

Her Malibu childhood: “When I say it’s a small town, people laugh, but it really did feel like that. Same kids from preschool till you graduate. So [modeling] really expanded my world by an infinite amount.”

Off-duty style: “I put a lot of effort into it. Then I realized I want to be comfortable. If you’ve seen me anytime in the last two years, I’m most likely wearing sweatpants, because my priority is just somewhere else now.” You get the feeling she’s not just talking about fashion: “I’ve gone back to who I am at my core.”

She’s different now: “I’m only 21, and I feel like I’ve lived a whole life already. Having the opportunity to travel taught me so much from such a young age. I got this really amazing education. I have this catalog of images that has recorded my growing up. You’re growing, and you’re changing: your body, what you like, your taste. Being surrounded by so many creatives shaped my taste. I’m very much an observer, and I retain a lot.

Her mom’s advice: “Be on time. Take the time to learn people’s names, and be nice to everyone. If you’re not grateful and happy to be there, there’s someone who would be. Even when I was really tired, or wanted to go home, or felt lonely, I would remind myself how lucky I was. Another thing she told me is, “I wish I had written more down,” because you think you’re going to remember these amazing moments forever, and one day, it’s hard to even know what shoot that was, where it happened, and when. And so I wrote it down; I journaled.

How her personal style has evolved: “I remember the first time being like, “Oh, people care what I’m wearing.” That wasn’t how I felt growing up. In Malibu, people didn’t wear shoes to school….

The idea of carrying around a book she didn’t read: “Getting people to read, no matter how you do it, is very cool. But how can you promote something that you don’t fully understand? I would never tell people to read a book that I’ve never read. I’ve had people be like, “Do you really read the books you carry?” I was like, “Would I be carrying a book that I haven’t read?” I always have a book, because in the job that I’m in, you wait around a lot. I cannot be on my phone. Social media makes me anxious when I spend a lot of time on it, so that’s why I escape into books.

The pandemic made her develop healthier habits: “I developed so much deeper relationships in my life, and also a connection to myself. When you’re forced to sit with yourself, all of a sudden, you’re aware of all the stuff you haven’t dealt with. There wasn’t communication happening between me and myself, and I felt out of body sometimes. Once I developed that, I was like, “This isn’t something I want to give up.” My personal life and my mental health are not something I’m willing to sacrifice for my job ever again. Right now, I’m getting to work at home, which is a beautiful thing, and not traveling all the time. I come home, and I’m with my dog. I have friends, and I’m cooking dinner. I see my therapist, and I see my family.

On nepotism: “I won’t deny the privilege that I have. Even if it’s just the fact that I have a really great source of information and someone to give me great advice, that alone I feel very fortunate for. My mom always joked, “If I could call and book a Chanel campaign, it would be for me and not you.” But I also have met amazing people through my mom whom I now get to work with. With acting, it’s so different. No artist is going to sacrifice their vision for someone’s kid. That just isn’t how art is made, and what I’m interested in is art. Also, no one wants to work with someone who’s annoying, and not easy to work with, and not kind. Yes, nepotism is prevalent, but I think if it actually was what people make it out to be, we’d see even more of it.

“My mom always joked, ‘If I could call and book a Chanel campaign, it would be for me and not you.’” Horsesh-t. Cindy nepotized Kaia from her early teens, introducing Kaia to all of her fashion and editorial connections, agreeing to do mother-and-daughter magazine covers, paving Kaia’s way for years. Not only that, but Cindy pushed Kaia into modeling very early on (something Kaia clearly wasn’t actually ready to do). Be real, Kaia. As for “No artist is going to sacrifice their vision for someone’s kid” – it’s actually kind of sweet that she’s that naive? It’s like “oh, honey, of course people sacrifice their vision constantly because some producer wants his daughter to get this part.” She’s really defending herself there – like, every modeling gig she’s ever gotten has been solely on her accord, because she was the artist/photographer/designer’s first choice? Baby girl, I hate to break it to you…