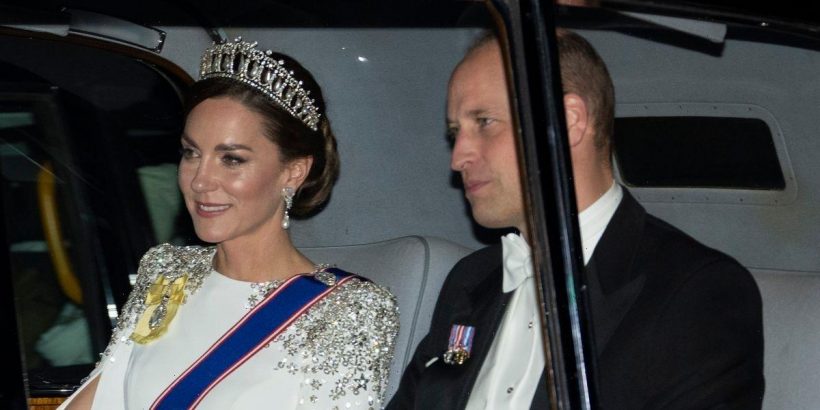 Prince William and Kate Middleton, the Prince and Princess of Wales, joined King Charles III and his wife Camilla, the Queen Consort, to host President Cyril Ramaphosa, of the Republic of South Africa, for a State Banquet at Buckingham Palace this evening (November 22).

The senior Royals looked dressed to impress as they welcomed the leader for the King's first state visit since he began his reign as monarch.

It is also William and Kate's first State Banquet in their new roles since the death of Queen Elizabeth II, marking a historic occasion for the Royal Family.

Charles was presiding over the banquet, which was held in one of the palace's state rooms in honour of Ramaphosa.

Kate, 40, dazzled as she wore a white embellished Jenny Packham gown and a diamond tiara – the Cambridge Lover's Knot.

It was a jam-packed day for the Royal family as they welcomed the President to the UK.

The state visit began with the official welcome at the Corinthia Hotel in London, where William and Kate, both 40, Charles, 74, and Camilla, 75, kicked off the festivities together.

Representing her role and the family well, the Princess of Wales opted to wear a special Prince of Wales pendant that showcased the Welsh flag with an array of gemstones and jewels for the occasion.

It also featured the Prince of Wales crest and was a special gift handed down from the Queen Mother, to Princess Diana, and finally Kate, after initially being gifted to Princess Alexandra ahead of her wedding to Edward VIII.

The mum-of-three also chose to honour the late Queen Elizabeth II with a pair of dainty drop earrings that were once in the monarch's personal collection, a gorgeous move that accessorised her plum outfit perfectly.

Charles and William were all smiles as they bowed and shook hands with the president.

After the initial meeting, Charles hosted a welcome ceremony on Horse Guards Parade, White Hall, where the president inspected the Guard of Honour, found by Number 7 Company Coldstream Guards.

The group, including William and Kate, then travelled in a carriage procession down The Mall, leading to a private lunch at Buckingham Palace.

In the afternoon, the King then accompanied the president for a special private viewing of South African artefacts from the Royal Collection in the Picture Gallery.

On the morning of Wednesday, November 23, the President is expected to be taken on a visit of the Royal Botanic Gardens at Kew, where he will be accompanied by Prince Edward, the Earl of Wessex.

President Ramaphosa will then make his way to Downing Street for a meeting with the Prime Minister, Rishi Sunak, before visiting the UK-South Africa Business Forum at Lancaster House with the Secretary of State for the Department of International Trade, Kemi Badenoch.

As the State Visit comes to an end, Lord Chamberlain will bid farewell to President Ramaphosa on behalf of The King before he departs from Stansted airport.