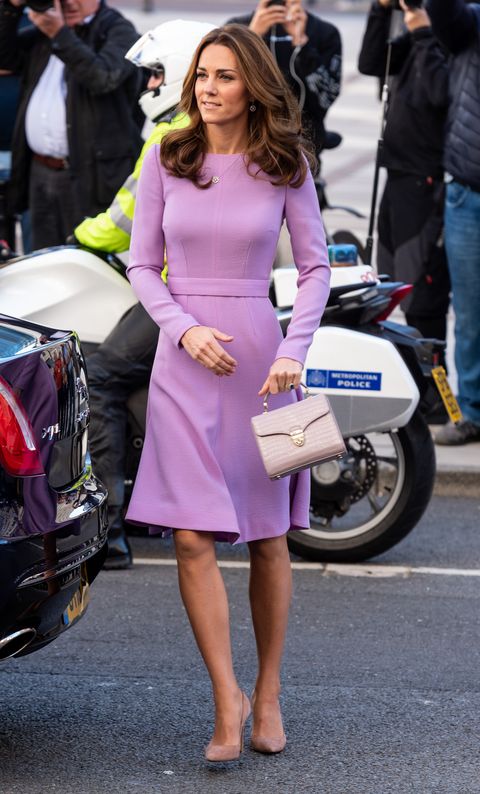 Kate Middleton and Prince William have arrived to the Global Ministerial Mental Health Summit, a gathering for world leaders, academics, and policy makers from around the world gather to discuss mental health issues, according to Kensington Palace.

The Duchess of Cambridge wore a lilac A-line Emilia Wickstead dress and a crocodile Aspinal of London handbag. She finished off the look with nude pumps and silver dangling earrings.

Middleton was previously seen wearing the Emilia Wickstead number, which is coincidentally called the “Kate,” for an appearance in Hamburg during the Cambridge’s royal tour of Poland and Germany last summer. Unfortunately this time, Prince George and Princess Charlotte were not around.

This marks the Duchess of Cambridge’s second public event since officially ending maternity leave last Tuesday, when she attended a solo engagement with Sayers Croft Trust. It’s also her first work appearance with Prince William since having Prince Louis, aside from their cameo at the Wimbledon final this summer.

Today’s event fits in with the couple’s work with Heads Together, a campaign that battles the stigma of mental health.

The Duchess, who has publicly spoken out about mental health a number of times, previously wrote an op-ed in Huffington Post UK about the importance of ending its stigma amongst children and adults. She added that she and William even teach the same thing with their kids.

“We hope to encourage George and Charlotte to speak about their feelings, and to give them the tools and sensitivity to be supportive peers to their friends as they get older,” she wrote at the time.

This won’t be the only time we see Kate this week. She’s also slated to make an appearance tomorrow at the Victoria and Albert museum, for her first visit as a royal patron of the institution. (She received the inaugural title in March.) There, she’ll open the museum’s new Photography Center.