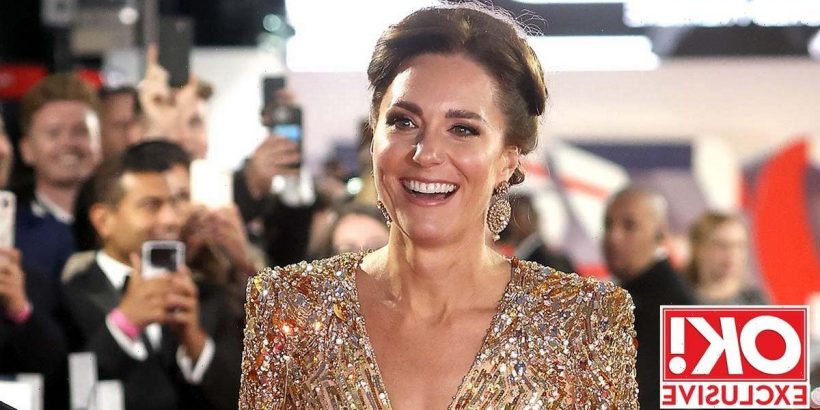 The 39 year old stunned as she attended the star-studded premiere of the latest James Bond film at London's Royal Albert Hall on Tuesday night, alongside her husband Prince William, Prince Charles and his wife Camilla, Duchess of Cornwall.

Royal expert Duncan Larcombe explained: "I think the images of Kate on the red carpet causing A-List celebrities to be starstruck and bedazzled by her shows that no matter what Meghan Markle and Prince Harry are up to in America, Kate is still very much a trump card in the Royals' pack."

Styling her brunette mane in a rare up do, Kate donned a sensational sequinned Jenny Packham floor length gold gown on the night, channelling her inner Bond girl.

The royal accessorised with statement earrings and wore a full face of make up.

Her doting husband, William, also 39, who is president of the British Academy of Film and Television Arts, looked dapper in a black tuxedo, which he teamed with £400 Arthur Sleep branded cashmere slippers.

He looked in his element as he smiled to the cameras next to a dazzling Kate.

The pair were joined by the Prince of Wales, 72, who stood tall in a black suit, while Camilla, 74, stunned in a shimmering blue gown.

Camilla, who has a brooch that is linked with one of Princess Diana's necklaces, styled her short blonde 'do in a glamorous curls.

William, Kate, Charles and Camilla looked at ease as they met with 007 star Daniel Craig alongside other members of the cast, including Rami Malek, Lea Seydoux and Lashana Lynch.

The royal outing comes after Prince Harry and wife Meghan Markle's trip to New York. The couple took to the stage at the 24-hour Global Citizen Live event in New York and criticised ‘ultra-wealthy’ companies that produce the Covid vaccine.

For the latest updates on Kate and the rest of the Royal family, sign up to OK!'s daily newsletter.