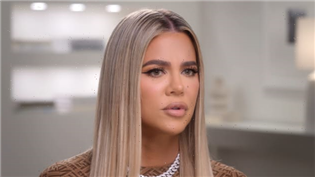 In recent years, Khloe Kardashian has developed an increasingly contentious relationship with her own fans.

It’s not just about trolls or body-shamers anymore. These days, Khloe sees even compassionate messages from fans as “mean.”

We here at THG have discussed this before. A lot of fans are worried.

Now, on Twitter and on The Kardashians, Khloe is saying it out loud, accompanied by some very clear examples.

While many people might dread going on James Corden, Khloe’s reasons had less to do with the polarizing comedian and more to do with public appearances.

As she confessed to bestie Malika Haqq during the episode, her anxiety was over the backlash that follows any interview.

Khloe explained that she feels that she “has” to “listen to everybody say this” or “judge” her.

While she does not have to do anything of the sort, she has been perceived to be actively looking for criticisms of her on social medai.

If that sounds unhealthy, well, yeah … but Khloe’s perception of what people say and how hostile it is is similarly worrisome.

Some of what these “trolls” say is absolutely hostile.

But some of the examples cites on the show itself highlight how far removed from reality Khloe’s idea of “mean” tweets really is.

“Tristan will never change,” one tweet warned. “A tiger can’t change its stripes.”

It’s good advice — advice that Khloe could have really used four years ago, if she’d been ready to hear it, for that matter.

But to her, apparently, it belongs with “butt implants” tweets and posts that make fun of her … even though it’s surely what any decent person would tell her.

After the episode aired, Khloe received support from fans on social media.

“It sucks but I understand it’s part of the game but some things get so mean and so heavy and it feels like it never gets lighter,” Khloe lamented.

“Only heavier and heavier,” she wrote. “COVID also made me super anxious in general.”

We can certainly sympathize with Khloe’s anxieties, both in general and specifically regarding COVID-19.

But we have to emphasize not not all of the “hate” that Khloe perceives comes from a negative place.

While Khloe is certainly on the receiving end of vicious insults and cruel mockery, a lot of what she thinks is “trolling” is actually earnest concern.

For example, when people talk about how she edits her photos beyond recognition, that is not body-shaming.

If Khloe makes herself look like an alien or like Slenderman or otherwise distorted using digital editing, the backlash isn’t over her body.

We don’t doubt that it was brought on by very real body-shaming, but Khloe’s actual fans who care about her worry about what’s behind these extreme edits.

Of course people are concerned, just as they were worried at the number of times that Khloe took Tristan Thompson back after he cheated on her.

Yes, it’s her mistake to make in each case, but it’s hard to watch when you care about someone’s happiness. If Khloe sees that as an attack … that’s not healthy, either.