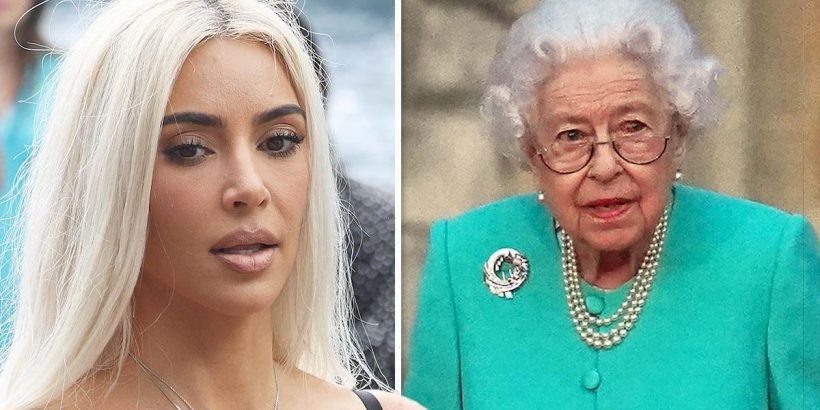 Kim Kardashian’s, 41, hopes of being a part of the Queen’s Platinum Jubilee celebrations have been quashed by Buckingham Palace after officials declined her request to attend Saturday’s Platinum Party at the Palace.

Representatives for The Kardashians star reportedly asked the Palace for tickets so that she could attend with her comedian boyfriend, Pete Davidson, 28.

It is understood that Kim was so desperate to acquire tickets that she said she wouldn’t mind if they are “not VIP”.

Nevertheless, Palace officials have “turned her down”, as have publicists for the BBC which will broadcast the star-studded show.

A source told MailOnline: “Kim rarely gets turned down to attend any event.

“So, this has been quite surprising, especially as she doesn’t visit the UK often.

“Kim and Pete love the Royal Family and really wanted to be a part of this special celebration.”

It is not clear whether Kim and Pete’s trip to London revolved around wanting to be a part of the Queen’s Jubilee celebrations.

They arrived in the UK earlier this week and have been spotted jewellery shopping in Mayfair.

Kim and the Saturday Night Live star also enjoyed a date night at The River Café overlooking the Thames on Monday.

The BBC’s Platinum Party at the Palace will feature a huge music line-up for the two-and-a-half-hour concert.

Queen’s Brian May, Roger Taylor and Adam Lambert will open the show to celebrate the monarch’s 70 years on the throne.

It marks 20 years since Brian May performed God Save The Queen on Buckingham Palace’s roof during a show marking the Golden Jubilee in 2002.

“Then there was a moment when I wondered… after Buckingham Palace roof, where can you go? Well… you will see.”

Party at the Palace will air on BBC One tomorrow at 7.30pm.