Kobe Bryant's estranged parents were seen paying tribute to their son and 13-year-old granddaughter Gianna at the memorial at the Staples Center.

Pamela and Joe Bryant had not spoken to their son Kobe for nearly seven years following a row about some of his NBA memorabilia.

After being cut out of the basketball icon's life, Vanessa Bryant welcomed them with open arms as they attended the emotional memorial in Los Angeles.

Clad in all-black clothing, Pamela and Joe were seen holding each other as Beyonce opened the memorial with two moving performances, of XO and Halo.

There were hardly a dry eye in the house as Kobe and Gianna were remembered, following their tragic death in a helicopter crash last month.

Los Angeles Lakers legend was tearful and was seen hugging Pam as the memorial began.

Pam and Joe have not spoken publicly about the loss of their son and granddaughter and were estranged from him in the latter years of his life.

Kobe's relationship with his parents ran into difficulty after his mother tried to auction off memorabilia in 2013 from Kobe's early career.

Pam and Joe publicly apologised to their son in statement, which read: "We apologise for any misunderstanding and unintended pain we have caused our son and appreciate the financial support he has provided over the years."

Unfortunately, Kobe was beyond the apology and with the damage already done he didn't speak to his parents again. 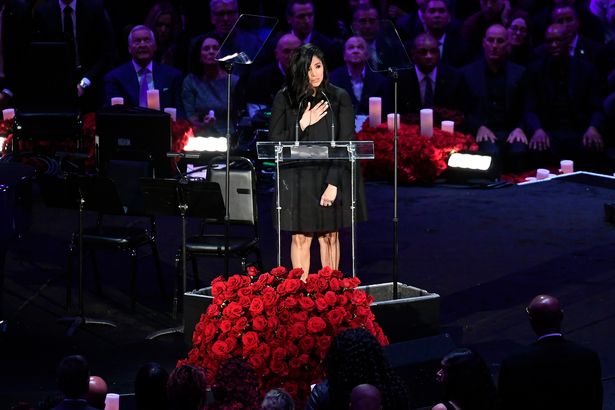 Kobe died in the helicopter crash on January 26, when he was heading with Gianna to one of her basketball matches at the Mamba Academy.

The official cause of the crash is still to be determined but it is suspected that the weather conditions at the time were a major factor in the incident.