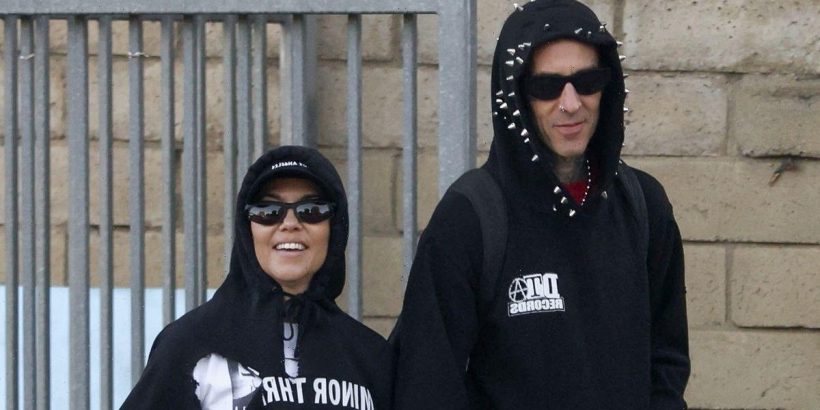 Kourtney Kardashian and Travis Barker were spotted out in LA running errands as they matched their attire.

The loved up couple – who got engaged in October last year – opted for casual cool and they were seen holding hands and trying to keep things incognito as they spent time together near their homes in Los Angeles.

Kourtney, 42, wore a green pair of cargo trousers alongside a baggy ripped hoody which revealed a white T-shirt underneath.

She clutched her phone and car keys in one hand and gripped her fiancé’s in the other as she tried to keep a low profile by wearing a pair of sunglasses and keeping her hood up.

Blink -182 drummer Travis Barker, 46, wore an all-black ensemble made up of black trousers and chunky boots with a studded jumper.

Like Kourtney, he also wore a pair of dark sunglasses and held his fiancé’s hand as the couple walked down the street together.

The couple – who were friends for years before getting together in 2020 – often match up their outfits, including most recently at the Oscars.

The pair made sure to co-ordinate their outfits as they both showed off rock star appeal in matching all-black outfits on the red carpet.

The Keeping Up With The Kardashian star wowed in a strapless little black dress by French fashion designer Thierry Mugler.

Travis, meanwhile, made sure to match his fiancé in a head-to-toe black outfit which consisted of a dapper double breasted Giorgio Armani suit, a crisp black shirt and shiny square toed shoes.

The drummer admitted before his red carpet Oscars appearance that getting glammed up was “all new” to him.

"For me, I kind of have a uniform I feel really comfortable in which usually is no shirt, a pair of pants and some Converse or some Doc Martens," he told Vanity Fair before his red carpet appearance.

"I get nervous playing in a suit," he said. "I'm so used to playing with no shirt on and just being free. I'm wondering if like, my stick is going to caught in the cuff?"

The musician added: “I never really have a glam team — I never get powder or whatever, but this is the Oscars so I'll do whatever," he explained, teasing that even being handed chapstick on a Q-tip was "all new to him."

"I put lotion on, made sure my nails were cut, and made sure my lips were moisturized. I don't even know what to tell [the makeup artist] to do, because it's not in my pocket."

For the latest updates on your favourite celebs, sign up to OK!'s daily celebrity newsletter.