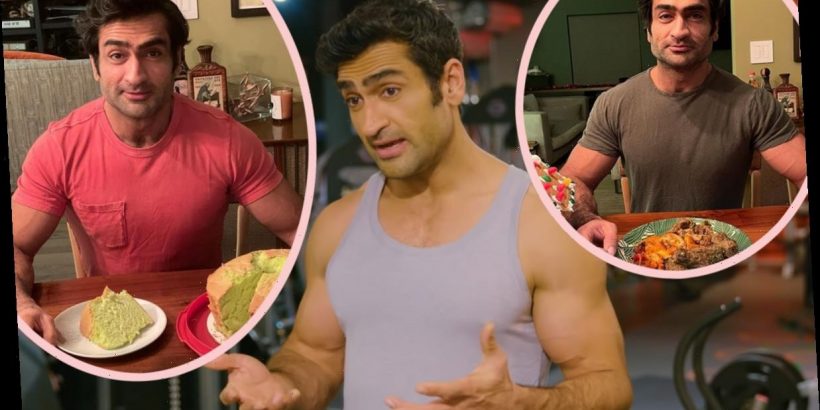 Last December, after months of bulking up for his role in Marvel Studios‘ (still) upcoming The Eternals, the comedian shared the fruits of his efforts in a couple iconic Instagram pics:

Naturally, the Internet lost their collective minds as their mental image of the Silicon Valley star was completely turned on its head.

But it was his casual new pics during the holidays that seemed to cause people to raise an eyebrow.

Enjoying Christmas feasts and “dessert Fridays” led to some adorably IG moments with his wife (and The Big Sick co-writer) Emily Gordon and his new true love, Pandan cake…

But naturally a lot of folks couldn’t see the holiday cheer past those absolutely ripped arms! Sadly some viewers weren’t in awe (or in a puddle of our own drool) but rather coming from a place of concern — over possible steroid use?!

“The Kumail Nanjiani thing makes me very sad. Our culture has created a system where people attempt to conform to impossible beauty standards to a point where it starts to render them unrecognizable, and then we mock and shame them. Men are not exempt from this.

We make it so that performance enhancing drugs or plastic surgery are all but mandatory for certain professions or beauty standards, but admitting to them is taboo. Too little of these things and you’re ugly, just a hair too much of them and you’re grotesque. It’s a nightmare.”

We don’t want to downplay the concerns this woman brought up about the pressure put on people in certain professions. Kumail himself has spoken about how getting into bodybuilding, which he grew somewhat obsessed with, gave him a tinge of body dysmorphia as he just started seeing flaws in his body.

But it wasn’t the concern for Kumail’s mental health that bothered fans about the way this was worded. It was the possibly unintended but rather blatant implication that the Lovebirds star had taken steroids!

Obviously it didn’t take long for fans to fight back against that speculation, and it wasn’t hard to find receipts.

Kumail has been very open about his fitness journey, speaking about it in depth on Dax Shepard‘s Armchair Expert podcast and sharing a video about his workouts. He even conscientiously talked about how his results were only possible because of the money for the best trainers and dietitians provided by Marvel. He’s also shared on social media about how careful he and Emily are being during the pandemic, isolating with little to do other than hang out with each other… and work out a lot. Anyone who thinks he achieved his new body by steroids or plastic surgery just isn’t paying attention, and it’s offensive, intentional or not, to connect his name to such a dangerous practice.

Others found it interesting that Kumail was being mentioned specifically after a decade of Marvel stars — including Chris Hemsworth, Chris Pratt, and Paul Rudd — have buffed up to portray superheroes without ever being accused of steroid use.

We should note, we saw a lot more defense of Kumail than attacks — a LOT more — but we are still going to throw whatever muscle mass we have on that side of the scales and say LEAVE KUMAIL AND HIS BEAUTIFUL BICEPS ALONE!

What do YOU think of how Kumail is looking after another year of working out?