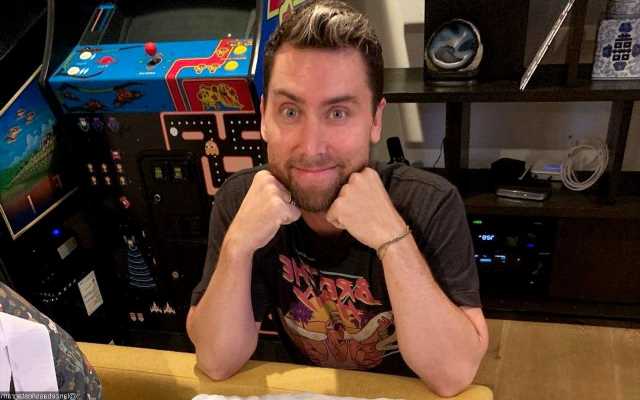 In one of the pics, the NSYNC singer can be seen smiling at the camera while his newborn twins, Violet Betty and Alexander James, sleep peacefully in cozy blankets.

AceShowbiz –Lance Bass is a proud new father. The NSYNC singer, who just welcomed his newborn twins with husband Michael Turchin, took to Instagram on Sunday, October 17 to treat fans to some first photos of his babies.

In one of the pics, Lance could be seen smiling at the camera while his twins, Violet Betty and Alexander James, slept peacefully in cozy blankets. Another picture also saw Michael holding one of their babies on a sofa.

“Haven’t slept much in 5 days and I’m covered in ick but I’ve never been so happy!” Lance wrote in the caption. “Now there are four of us in this house that wear diapers (hint: it’s not me or @michaelturchinart).”

Some of his famous friends took to the comment section to congratulate the new parents. “Congratulations!!!!!!!! What a blessing!!!!!!!” Kris Jenner said. “Just breathtaking. Congratulations,” Leslie Jordan added.

This arrived after Lance shared on October 14 the exciting news of the arrival of his and Michael’s twin babies via surrogate. “The baby dragons have arrived!!” the singer wrote on Instagram, sharing a picture of their birth certificates. “I can not express how much love I feel right now. Thank you for all the kind wishes. It meant a lot. Now, how do you change a diaper??! Ahhhhhhhh!”

The singer first announced the pregnancy on June 1, sharing with E! News that he and Michael were “very excited on becoming a family of four!” In another interview with PEOPLE, he shared, “We always knew that if we were going to start the family, we wanted to go for twins just because Michael’s a twin–he’s a boy/girl twin. And he just loved that experience.” He added, “I always wanted to have a twin, but we’re like, ‘Well, that’s so perfect because now we can do one of mine, one of yours.’ It was a no-brainer!”

Their journey to parenthood wasn’t an easy one, though. The couple, who got married in 2014, had to spend years to find egg donors as they went through nearly a dozen rounds of IVF and their surrogate suffering a miscarriage. “There are not many great examples of gay couples having families in the public eye,” Lance said at the time.

“We knew that we wanted to be very open and transparent with our experience because we wanted gay couples to be able to relate to us and say, ‘Oh my gosh, we’re going through that too.’ Or like, ‘Oh, now that’s, hopefully, what we can do.’ And give them a kind of a blueprint of how to do it. If you want to start that family, start that family. It’s going to be incredible,” he added.