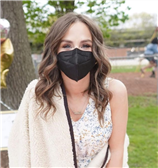 Leah Messer has experienced many, many ups and downs during her years in the public eye.

At times, her struggle has been difficult to watch, but fans were rewarded over the past year or two by an inspirational period of growth for Leah.

Leah published a memoir that offered fresh insights into her abusive childhood and her struggles with substance abuse.

And while she remained single during the pandemic, Leah finally seemed as though she didn’t need a man in her life in order to feel complete.

Unfortnately, the high of the past year soon gave way to a devastating low.

Recently, Leah found a lump in her breast and her doctor recommended that she undergo a biopsy.

This meant a painfully long wait for results, during which, Leah was understandably in panic mode.

But she remained calm for the sake of her kids — and in a display of maturity that would have been surprising at any point in Leah’s past, she even informed her first husband, Corey Simms, of the gravity of the situation.

“I gave Corey a heads up, in case the girls mention it, and I’m on my way to drop them off to him now,” Messer said in a voice-over during the latest episode of Teen Mom 2.

“So, I know I mentioned to you about the lump in my breast,” she told Corey.

“In case the girls say something to you or ask you, and then I just like to let you know these things, in case I do need your support,” Messer continued.

“Yeah, you told them about it, I’m aware of it, so if they have any questions, I can come to you about it and let you know. That’s the best scenario,” Corey replied.

Well, that went smoother than it might have gone — but unfortunately, Leah’s week from hell was just getting started.

Shortly thereafter, Ms. Messer “got some upsetting news” about that other health crisis.

“We just got a call from the school, and there’s been a positive [Covid-19] case in one of the classrooms,” she said.

“Now, in-person school is shut down for at least two weeks,” Leah continued.

“I was supposed to have a doctor’s appointment for the tumor on my breast, and I definitely canceled it for the covid scare.”

Yes, Leah postponed the appointment, for fear that she might “potentially expose anyone else” in her household.

So while it may not have been intentional, she called attention to an underreported aspect of the pandemic — that of people with chronic health issues forgoing care out of fear of getting infected.

And amazingly, that was not Leah’s final headache of the week.

When it was revealed that she did not have health insurance, many viewers took to social media to blast Leah for taking such a risk.

But as she later explained on Twitter, Leah was not aware that she had any options:

“Growing up, health insurance was not a topic discussed in my household. Coming from a low-income family, I was on state insurance until I got married and then was picked up on my then husband’s insurance,” she wrote.

“I never had to learn about it or even think about it for that matter,” Messer continued.

From there, Leah encouraged others to learn from her mistake:

“I hope people out there learn what I went through and understand that there are options and resources out there if you find yourself in need of coverage but don’t know where to start,” she said.

Yes, the health insurance system in this country is needlessly complex, and it often fails to serve poor families.

Leah is well-off now, but for much of her life, she lacked the knowledge or resources to explore her healthcare options.

Hopefully, going forward, fans will praise Leah’s honesty rather than berating her for her past ignorance.