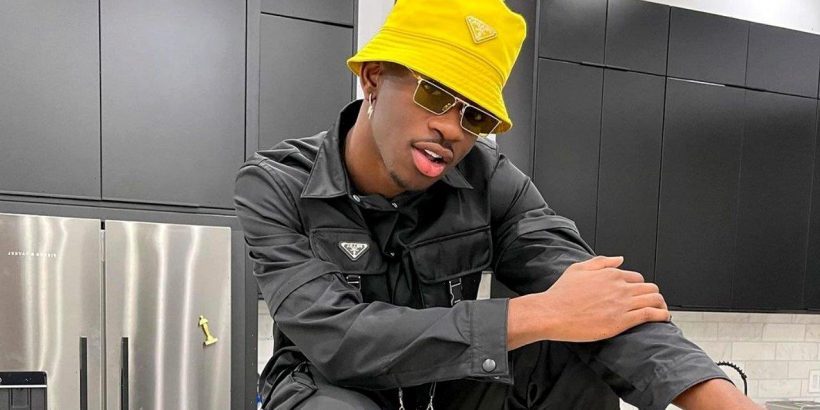 The ‘Old Town Road’ hitmaker says his ‘life has come full circle’ as he teams up with the fast food chain after he previously worked at its Atlanta-based restaurant.

AceShowbiz –Lil Nas X has been unveiled as the new chief impact officer of Taco Bell. The “MONTERO (Call Me by Your Name)” hitmaker teamed up with the fast food chain for his upcoming album “Montero”.

Under the partnership, Taco Bell will be launching “newest menu innovations” and tapping into the 22-year-old rapper’s history with the company. The company also described the newly-created position as an “honorary role” which will help the Grammy-winning artist “collaborate with the brand experience from the inside out.”

CEO of Taco Bell Mark King said, “Lil Nas X knows the job, the experience and the culture Taco Bell creates for its fans – including its people. This unique partnership will deliver on more than just marketing, allowing us to tap into the genius of Lil Nas X to inspire our team members and align with our commitment to unlocking opportunities for young people.”

“Lil Nas X is one of the most important voices of this generation,” added Jennifer Frommer, the SVP Brand Partnerships & Commercial Sync at Columbia Records. “His expertise in understanding social media and youth culture alongside his skills in creating great music makes this partnership with Taco Bell exciting, brave and one of the most innovative campaigns I’ve had the pleasure of creating.”

Shortly after the announcement, Lil Nas X took to his Twitter account to joke about working at Taco Bell again. “Life has come full circle, I officially work at Taco Bell again,” he wrote. In 2017, the rapper was part of the fast food restaurant team at an Atlanta storefront. 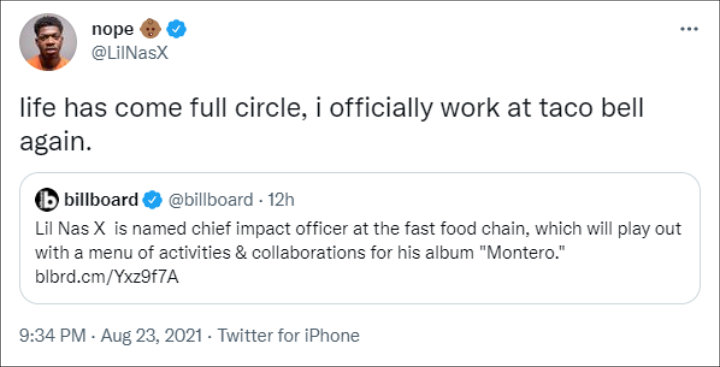 Lil Nas X confirmed the news of him becoming the CIO of Taco Bell with a joke.

In addition to taking on his CIO role, Lil Nas X will partner with the Taco Bell Foundation to award young creatives with funding from the Live Mas Scholarship. According to the statement, the star will appear in Taco Bell’s breakfast campaign, while “continued fan engagement opportunities” will be announced later.

The partnership arrives nearly two months after Lil Nas X announced the forthcoming release of his debut studio album “Montero”. The LP, which serves as the follow-up to his 2019 EP 7, will include his previously released singles “MONTERO (Call Me by Your Name)”, “Sun Goes Down” as well as “Industry Baby”.