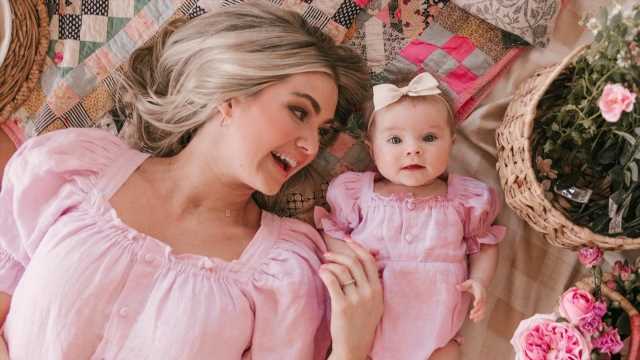 Lindsay Arnold is so ready to celebrate her first Mother’s Day as a mom!

When ET spoke with the Dancing With the Stars pro over Zoom, she adorably admitted that she didn’t even realize until our interview that her family would be celebrating her this year, as she’s just been focused on what to do for her own mom, Mindy. Arnold and her husband, Sam Cusick, welcomed their first child together, baby girl Sage, last November.

“Literally, I kind of just realized now that this is going to be my first Mother’s Day with the baby girl. That is actually crazy. Oh my gosh!” she said, when asked if she has any plans for the special day. “I don’t know why that’s just hitting me. Like, obviously I’d thought about it, but it’s now really, really hitting me. It’s so crazy.”

“I’m definitely going to have to tell my husband to make sure he gives us a nice, fun day,” she added. “I guess Sage can’t really give me any presents, but truly just her existence is the greatest gift of all. That is going to be so fun.” 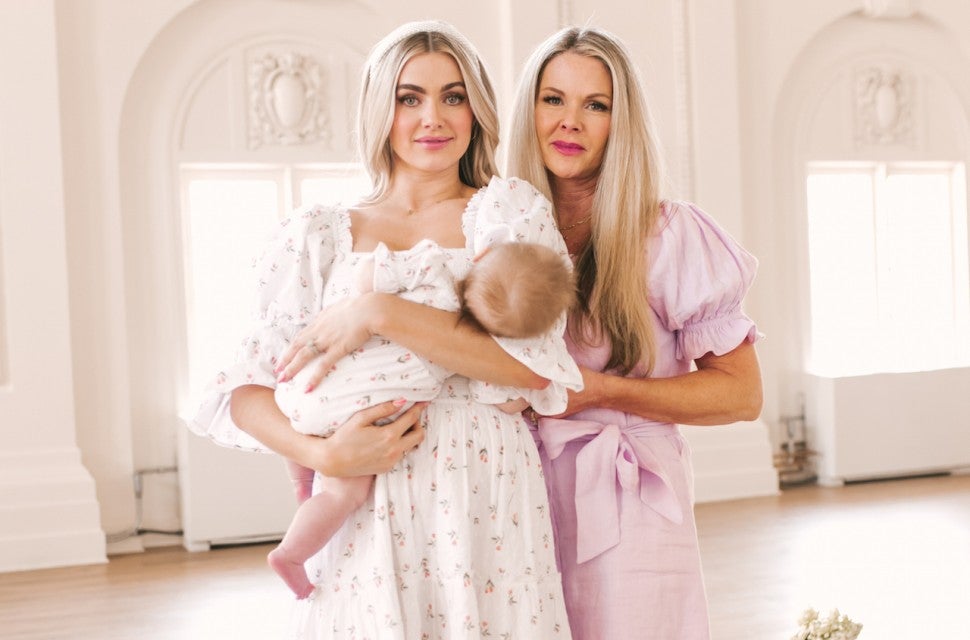 In addition to spending time with her family, Arnold is also celebrating the release of her “dream project,” a capsule collection with Ivy City Co. that launched just in time for Mother’s Day. The collection is themed around family and motherhood, and the designs were named after the three “most important women” in Arnold’s life: “Sage” (her daughter), “Mindy” (her mother) and “Jill” (her late mother-in-law).

“From the second I opened the envelope and found out Sage was a girl, I’m like, ‘I absolutely have to do a mommy-and-me dress collection,'” Arnold recalled. “Literally I don’t think I’ve ever been more excited about a project than I am about this one. I got to dream up what I want to wear and match my little baby daughter in. Like, that is the dream for me!”

“This was Sage’s debut photo shoot and I was a little nervous because I knew it was going to be a long day. We were there for, like, three and a half, four hours and it was like, she’s the star, so she had to be on,” she added. “Honestly, she was a rockstar. It was so fun. She did a great job, and I was so proud.” 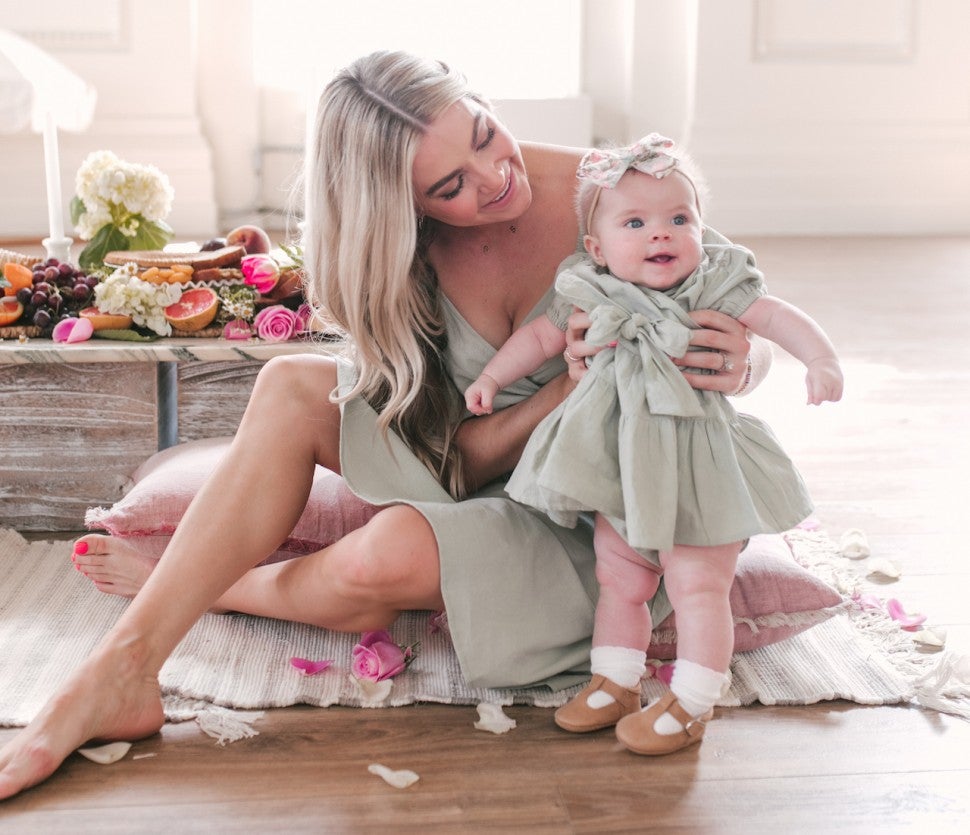 Arnold then opened up about what her first six months of motherhood have been like, telling ET that her “whole entire life has changed,” in the “most incredible way” she could have ever imagined.

“I am a mom, and it is the best thing that has truly ever happened to me,” the 27-year-old dancer gushed. “It’s the most fulfilling thing that I’ve ever had in my life, and I’m just so grateful for the opportunity to be Sage’s mom. Every single day, I wake up, I’m like, ‘No, this is not my life. This is so amazing!'”

“But with that, obviously a lot of changes,” she added. “Like, my life has completely changed in the past year and it’s been a really good year of growth and connecting to things that I feel like are most important, which is family.”

Arnold joked that she’s quickly realized that there’s really “no guidebook” to parenting. Hours before our interview, for example, she and her husband had their first real scare with Sage, when she rolled over onto her stomach for the first time in her crib during the middle of the night.

“She was extremely upset. We had to soothe her and calm her back down, but I’m so grateful that she was OK,” Arnold recalled. “Literally, my heart shattered, I completely lost it. I was hysterically crying for about an hour and a half and my husband had to calm me down. I did not enjoy it. I feel for moms out there because I know it’s just going to keep happening.”

“Everybody tells you, ‘Just be ready to be a parent, because you’re going to be terrified 95 percent of the time.’ You’re kind of just blindly going through life and every single day is like a guessing game,” she continued. “You wake up and you’re like, ‘OK, Sage, what are we going to do today? What time are you going to take your nap? How many times are you going to want to eat?’ It’s really just a super kind of inconsistent lifestyle, but I love it.”

Since becoming a mom, Arnold has been documenting her parenting journey on social media, and opening up about everything that comes along with it — including the most vulnerable moments. Arnold hopes that her candidness will inspire other moms to have similar conversations with their friends in real life, and to not feel so insecure about the challenges and changes they face in this new chapter of their lives.

“Honestly, when I woke up [to the scare with Sage], I was like there’s no way I’m telling anybody about this. Because you immediately feel terrible, like, ‘It’s my fault, I’m a horrible mom. I’m so embarrassed this happened. If I were a better mom that wouldn’t have happened,'” she confessed. “Those thoughts run through your head. But then I go, ‘No, Lindsay, share this story because I’m sure it happens to so many moms out there and it’s important for us all to know that we’re not perfect.’ We’re going to make mistakes. Things are going to happen, but you just have to keep pushing through it.”

As for physical changes, Arnold believes that our evolving bodies are something all women should celebrate.

“My body is different, and I think it will always be different, but I’m so grateful for it, because I look at Sage and I’m like, ‘You are the result of everything that has changed in my life and you’re more than worth it.’ I would do it a million times over again if that meant I got to have Sage,” she explained. “I really want to remind women that it’s OK to change. Your body’s going to change, we’re all going to change.”

“I think the biggest thing is, and this is hard, it’s easier said than done, but trying to focus on what your body is doing instead of what it isn’t doing. Because bringing life into this world is no joke, and it’s truly the most beautiful thing that could ever happen,” she continued. “So instead of saying, ‘My body’s not changing as quickly as I’d like it to, it’s not bouncing back as much as I’d want it to,’ think like, ‘My body is giving food to my newborn baby, or my body is waking up at the wee hours of the night multiple times to console my [child].'”

Arnold told ET that something she tries to do at the end of each day is practice gratitude, and give herself grace for not being “perfect.”

“As I’m rocking Sage to sleep, before I put her down, I try to say three to four things I’m incredibly grateful for that day. I feel like the gratitude has really, really helped shift my perspective on motherhood and on the changes that come with it,” she shared. “The other thing is be vocal about it. I think it’s important that you tell people how you’re feeling. I think my husband has been the biggest help for me in this. To just say, ‘This is how I’m feeling,’ and having him there to just understand what I’m going through is super, super helpful.”

While Arnold has plenty of things to be grateful for, she revealed that one of the simplest mommy-and-me moments is her favorite: spending one-on-one time with Sage before bed.

“About a month ago, there was a solid month straight where every single night at the end of the day, we would take a bath together. It’s literally my favorite thing in the world,” she gushed. “The moments I love the best is breastfeeding her in our bath and just having those close, quiet moments before I put her down for the night. I seriously am going to cherish that forever.”

“That is my favorite time because it’s quiet,” she added. “It’s before she’s going to sleep. I get to feed her and just kind of relax and unwind at the end of the day together.”

Another thing Arnold absolutely adores about parenthood? Seeing her husband step into his new role as dad.

“I have to say, I have never loved him more than watching him be a dad to Sage,” she marveled. “People told me, ‘Just wait until you see him be a dad.’ I think I expected it, but I didn’t expect to feel it this much. It’s so cool seeing him bond with her. Naturally there’s this instant connection between them. I love it, and it just makes him even more attractive to me.”

Arnold also revealed whether she wants to return to Dancing With the Stars this fall after taking a season off to give birth to her baby girl. She said it’s definitely a “yes” for her, if producers give her the call!

“I have every intention of coming back! I am ready to go, I feel good, I want to dance again, I’m super excited about it,” she exclaimed. “But as you know, us pros don’t really get to decide if we come back. We can say we want to do it, but at the end of the day, [producers] have to ask us back on the show, which doesn’t happen until the last hour, I swear.”

“But that is my plan. I would love to be back on the show and I cannot wait to get back to dancing,” she continued. “And I just miss it. So I am so in … I’m ready to do it!”

Arnold added that if she were to compete for season 30 and take home the mirrorball trophy, she would obviously dedicate it to Sage. “I think Sage would be really disappointed in her mom if she doesn’t win,” she joked. “So, c’mon, we gotta do it! Bring it home for Sage! I gotta win as a mom now. It’s gotta happen.”

Hear more in the video below: