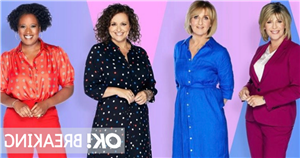 Loose Women's Charlene White has landed in Australia ahead of this year's I'm A Celebrity… Get Me Out Of Here! kicking off very soon.

Charlene told reporters: "I don't really like creepy crawlies so I don't imagine it was a show I would ever do to be honest. And I am not particularly outdoorsy so I don't know how that would work.

"I don't camp, I stopped going to Girl Guides because they kept making me camp so I definitely don't camp."

Asked about who she would miss she added: "I would miss my family, the kids and my other half and the other Loose Ladies. If I am not hanging out with them every week I am not sure what to do with myself.

"I think if I was ever to do a show such as I'm A Celebrity the issues will mainly be the outdoors, I don't do bugs, I don't do spiders, I don't do any of those things. So why would I sign up?!

"There are several facets to me so perhaps I would surprise people. Who knows? Maybe you will see a different side."

It comes as England Lioness Jill, 35, who has played in 10 major tournaments and helped England win Euro 2022, is hoping to score as Queen of the Jungle on I'm A Celebrity.

Asked what would be more nerve-wracking, the Euros final or the jungle, Jill told reporters: "That is a very good question but I don't think anything will test my nerves as much as that final.

"I have never really been confronted by snakes and spiders in England so I don't know how I will react to them, apart from a spider in the bath every now and then."

Talking about being competitive in camp and trying to win, she added: "I am competitive on a day to day basis so yeah."

Jill sweetly added that she would miss her partner Shelly Unitt and her family before getting into a waiting car.

Owen, 23, who stars as Romeo Nightingale in the Channel 4 soap opera, spoke to reporters ahead of his jungle debut and teased that he's "up for romance" while revealing the secret way he'll say hi to his mum at home.

Meanwhile, fellow campmate Olivia Attwood, 31, shared her concerns about the others "tolerating [her]".

This year's campmates' arrival come shortly after the I'm A Celeb set was forced to close for 24 hours as a result of Australia's storms.

A spokeswoman for ITV told the PA news agency: "We closed site for 24 hours as a precautionary measure due to the inclement weather."

It is not the first time production of the show has been marred by adverse conditions, with the previous series, filmed at Gwrych Castle in North Wales, hampered by Storm Arwen.