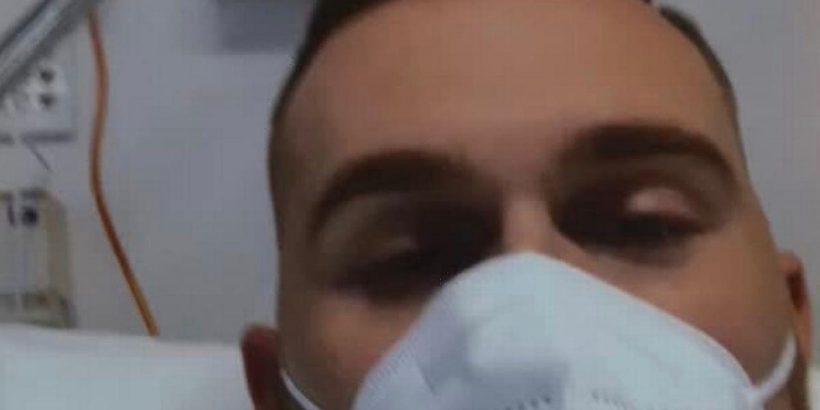 Love Island Australia’s Eden Dally has been involved in a major car accident in Sydney, which resulted in him being taken to hospital.

Posting a photo on Instagram Stories of himself wearing patient scrubs and a mask, the 29-year-old initially didn’t include a caption with information on why he was in there, leaving fans puzzled.

He has since said that a driver hit his car from behind causing him to crash into the car in front, eventually creating a four-car pile up. The frightening incident left Eden with injuries, he has revealed.

"My body hurts like hell… I have a very sore back and a headache,” Eden told Daily Mail Australia.

Other images from the accident show cars with the bumpers completely smashed in and window glass shattered.

Prison guard Eden became a household name after appearing on the first season of Love Island Australia back in 2018. The muscly star has also gained the title of Mr World Australia since leaving.

He found a connection with former fellow contestant Erin Barnett on the reality dating show, and the pair came in at an impressive second place. However, the romance was short-lived as they both split a mere four weeks later.

Losing out on love and the prize money, Eden’s life took a quick turnaround when he met Married At First Sight Australia’s Cyrell Paule at a party.

While he initially wasn't her type, Cyrell later moved in with Eden and after five months, they announced they were expecting their first child together.

Their son Boston was welcomed in February 2020 and Eden and Cyrell continue to share updates on parenthood on social media, along with posts about their relationship, which has gone from strength to strength.

“2 years with my partner in crime,” the 29-year-old captioned a photo of him and Cyrell in March of this year, commemorating their second anniversary. In the image, the pair are standing inwards towards each other wearing matching black ensembles.

“Love this fiery girl who never holds back always speaks her mind and is always there for me I’m lucky to call you my best friend love you @cyrelljimenezpaule.”

Cyrell has reciprocated her love for boyfriend Eden on Instagram many times, posting a video of him in September smiling at the camera in what appears to be their garden.

"Here’s to putting up with all the s*** I put you through and taking it like a champ. I love you and appreciate everything you do for @bostonejdally and iI!"