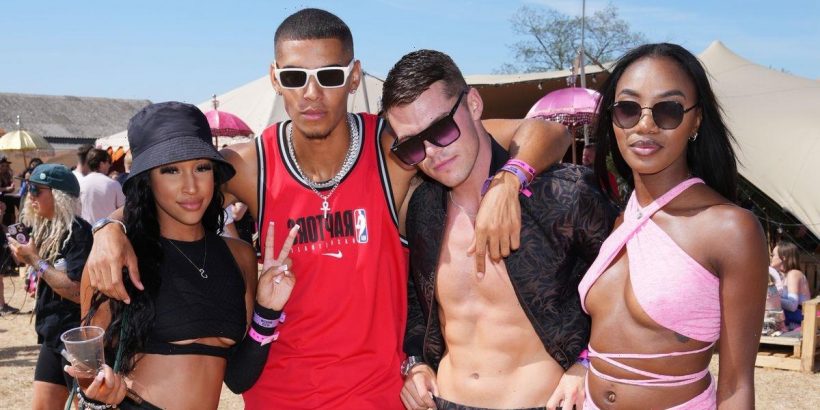 Some of the Love Island stars from this year's show proved their bond is stronger than ever as they enjoyed a group day out at a music festival in the summer sunshine.

The group dressed to the nines as they showed up at We Are FSTVL, which was presented by British clothing retailer Pretty Little Thing, and it had performances from artists such as Craig David, Tyga, Mabel, Chipmunk and Yungen, to name a few.

Dancer Danica, 21, who clawed her way to sixth place in Love Island after a very rocky road to finding love, confidently struck a pose in a black string bikini top and a cream belted mini skirt, which she styled with a pair of trainers, as she held a fan to cool off in the scorching temperatures.

The rest of the girls also turned up the glamour, with Coco Lodge sporting a similar look to Danica in a tiny black bikini top and a white skirt with thigh-high lace-up boots, whilst Mollie, Chyna and Jazmine rocked shorter ankle versions of the lace-up boots.

Some of the girls were there for two days, with Chyna rocking a skimpy hot pink number on day one of the festival, before showing off a stomach-baring blue tie-dye cover up worn over a matching bikini on day two.

Jazmine also stunned in a bright green outfit and Mollie rocked a cow-print dress, whilst Lacey Edwards was also seen in various Instagram stories in a pale blue denim mini-dress.

Summer Botwe, meanwhile, sported a cut-out black top and shorts on one occasion and wide-legged white trousers over a red bikini on another.

Danica's former Love Interest Jay Younger, 28, showed off his chiseled abs in a short sleeved white shirt – worn open – which he teamed with a pair of navy shorts and sparkling white trainers. Billy Brown also showed off his abs in a leaf-print co-ord outfit, whilst Josh Le Grove sported a red basketball vest and shorts.

Coco and Summer looked like they'd put last week's spat behind them, after they exchanged catty words at the filming of Love Island: The Reunion on Thursday, August 4.

After the rumour mill had been spinning, viewers finally got to see what the fight was about, after the episode aired on ITV2 on Sunday night.

After Darren Harriott had asked Summer, Billy, Josh and Coco if there had been any dalliances between the former Islanders since they left the villa, Summer said: “I know someone who wishes they would have got with someone, but we move…”

As the audience in the studio responded, Coco could be seen shaking her head as she commented: "It’s all B******t.”

She then told Summer: “Oh it’s only banter. If you can’t handle a big personality don’t go on reality TV.”

As Coco continued to shrug it off, Summer decided to escalate things further as she ominously added: "If you wanna talk about you, we can…"

Summer has since confirmed that she and Josh are no longer dating and are just friends, as she gave the update in an Instagram stories post.

She wrote: "Thank you for all the love and support after the reunion show, it never goes unnoticed.

"To clarify the 'argument' between me and Coco was heavily edited and there was more to it than met the eye.

"I would also like to clarify that me and Josh are only friends and haven't decided to pursue things romantically at this time."