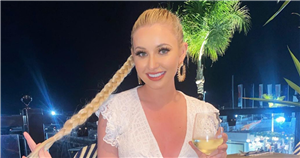 Amy Hart has opened up on feeling "miserable" as she shared upsetting news with her fans during her journey to freeze her eggs and hopefully get prepared for a baby.

The former Love Island star and TV personality has been completely transparent with her followers since embarking on her life plan, and sadly revealed that she'd received a phone call from a nurse to inform her that her AMH level was at the lower end of the range.

While the measure is merely a general marker of the size of the remaining pool of eggs in a woman's ovary, and does not necessarily indicate any level of fertility, the 29 year old admitted she was disappointed by the result.

Sharing a message to fans on her Instagram stories, the blonde Loose Women star began: “Don’t wanna do a talking story coz I’ll just get upset. Just had call from nurse to say my AMH is six. "Two years ago it was eight. They told me it should be between six and 20," the star continued.

"Obviously it’s still in the range but it’s the equivalent of getting 1/14 on a quiz isn’t it," she said, unable to hide her disappointment.

The reality TV favourite went on to say that unfortunately she also had to put on a brave face as she had an event to attend in the evening, when she would rather have stayed at home.

“Got to get all dressed up and go out tonight and all I wanna do is lay on the sofa in my onesie and be miserable," she told her fans.

“But I will look at the positives. I’m starting freezing soon. Loads of meds.

“Five in the freezer already and breeeeaaathhee," Amy added.

It comes after the beauty revealed she was planning to get her body in “tip top condition” with a 12-week healthy-eating and fitness plan to freeze her eggs back in October.

Initially, the star had received some criticism from her followers over the gruelling plan, so she cleared things up on her Instagram.

Explaining she was unhappy about the “habits” she’d gotten into and was determined to simply live a healthier lifestyle, Amy added: “I’m thinking about freezing my eggs again next year, like at the beginning of next year, so I need to be in you know a good place with my eating.

“Cutting down on my drinking [and] making sure I’m sleeping so my body is in tip top condition.”

Amy was faced with some tough life decisions after a fertility test showed she was at risk of going through early menopause back in March.

Speaking on Loose Women about the news, the star explained: "I was very unlucky in dating and my whole thing was, 'What if I never have children?'

"My mum said to me, 'Well if you get to 35 and you haven’t met the right person, we would financially and emotionally support you to help you have a baby on your own.’”

For all your latest updates on reality TV stars, sign up to OK!'s daily newsletter.