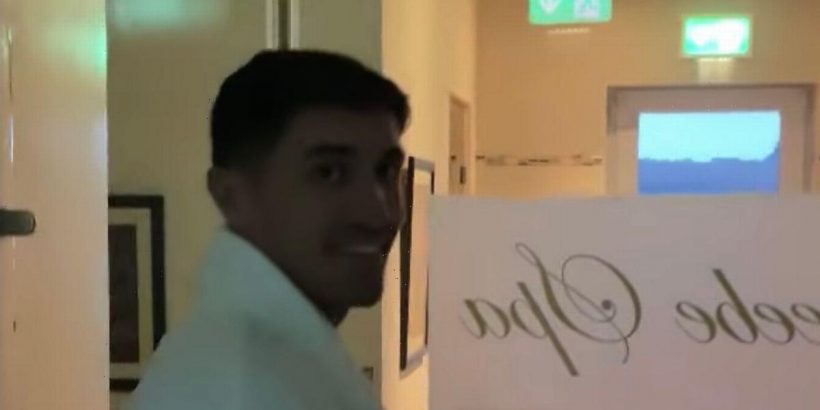 Greg O’Shea shared his “smashing day” at the spa where he accidentally broke a huge glass door.

The Love Island star uploaded the hilarious video to Instagram on Thursday to show his far from relaxing time at the spa with pal, Harry McNulty.

The reality star shared a video of himself walking across the patio into the spa sporting the classic white robe. Harry recorded the 26 year old walk towards a glass door, giving a final cheeky grin to the camera before he turned round to open the door.

As Greg tries to open it the door initially doesn’t move so he pushes his body against it and the entire door shatters.

The glass falls into tiny pieces beneath him as the reality star tumbles to the floor and the video cuts out.

He captioned the video: “Smashing day at the spa! @screebehouse I had such a lovely time, please let me come back.”

Fans and friends flooded to the comments to express how hilarious the video was and how brilliant it was that Harry captured it.

While another person commented: "This is too funny…some strength there."

And someone else chimed said: "Oh noooo. Not the start you'd want to relax."

The hilarious video that has now gained over 17,000 likes on Instagram comes after Greg has revealed he plans to embark on a new career.

Greg rose into the spotlight when he joined the line up of the fifth season of Love Island in 2019 and went on to win the show with Amber Gill.

He also plays for the Irish rugby union and he even competed in the Tokyo Olympics, where the team finished 10th in the world.

But shortly after this achievement, the 26 year old admitted that while he didn’t want to retire from rugby, he would be as the rugby salary wasn’t enough to live off.

He disclosed: “I didn’t really want to retire per say. Like Sevens is the best job in the world, you get to travel the world with your friends, play rugby, but it’s just not financially secure compared to the 15s side.

"And eventually you just have to be realistic and realise you can’t play it until you're 35 and retire with loads of money in the bank. But it’s amazing.”

Greg even added that you “can’t making a living out of it.”

Stay up to date with all the latest on Greg O'Shea by signing up to OK!'s daily celebrity newsletter .