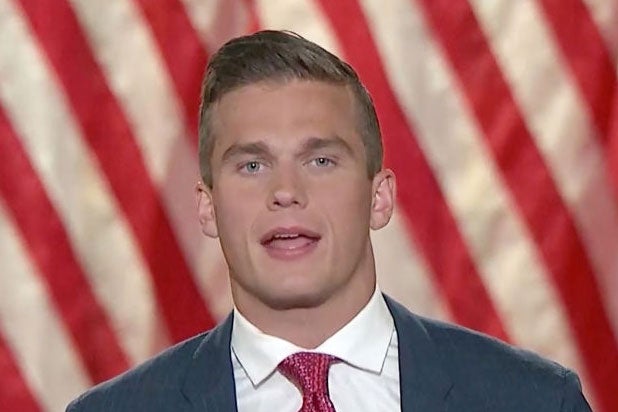 “Cry more, lib,” Cawthorn tweeted Tuesday night after the Associated Press projected him the winner in his contest with Democrat Moe Davis, a 62-year-old retired Air Force colonel. Cawthorn won 54.4% of the vote to 42.4% for Davis, with 99% of the ballots counted.

Cawthorn, a real estate executive who was paralyzed from the waist down as the result of a car accident when he was 18, will replace New York Democrat Alexandria Ocasio-Cortez as the youngest member of Congress. He will also be the youngest Republican ever to serve in the U.S. House of Representatives.

Madison Cawthorn has been a polarizing figure since entering his first political race and defeating President Trump’s favored candidate, Lynda Bennett, in a June Republican primary. He memorably spoke on the third night of the Republican National Convention in August.

Over the summer, he came under fire for Instagram posts of his 2017 visit to “the Fuhrer” Adolf Hitler’s “Eagle’s Nest” vacation home in Germany — a trip that Cawthorn described as a “bucket-list” event.

He also faced an accusation of sexual misconduct from a woman he dated when he was 19. Cawthorn acknowledged the encounter but said, “I did try and kiss her just very normal, just in a flirtatious way.”

Last month, his campaign launched an attack website that targeted a local reporter for working for “non-white males, like (Sen.) Cory Booker, who aims to ruin white males running for office.” Cawthorn later said that sentence was a “syntax error” in an attempt to criticize “left-wing identity politics.”

Booker responded by telling the HuffPost: “It just really personally saddens me that somebody who is so clearly racist is a nominee of a major party, and I think it’s a disrespect of the entire community.”

“Hello from the uk. Is this how you guys act when you win? Don’t you want to unite, or build?” tweeted British humorist Danny Wallace tweeted, the author of a book on the spread of rudeness.

And Walter Schaub, the former director of the United States Office of Government Ethics, wrote, “North Carolina really sends garbage to the nation’s capital, doesn’t it?“