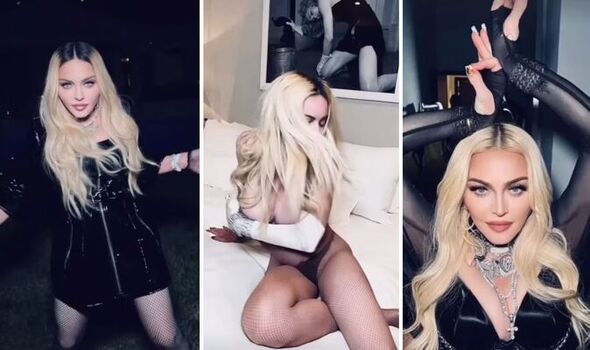 Madonna shared a series of seriously provocative images on Instagram

The star took to Instagram to suggest that people were not “really living” unless they were someone the Church would have “killed 400 years ago.”

Madonna, 64, has taken to Instagram to share thoughts about women embracing their sexuality. The star has been pushing boundaries of what is considered an acceptable expression of body image for over 40 years and shows no signs of stopping anytime soon.

She shared a thought-provoking question with her fans on the picture-sharing website in full view of her 18.5 million followers.

“If you aren’t someone the church would have killed 400 years ago… are you even living,” she said.

She showed off a snap of herself giving a smouldering look at the camera while dressed in a low-cut black jumpsuit with silver embellishments.

The superstar and mom-of-six posed for a snap of herself in a pair of black underwear and fishnet tights.

Madonna has been a lifelong supporter of female sexuality and expression

The singer shared her thoughts on the subject with her 18.5 million followers.

Madonna was dressed in black briefs and fishnet tights

Madonna also linked back to her remix album, Finally Enough Love: 50 Number Ones.

She could be seen flushing her toilet, and in another shot, she was laying in her bed smoking.

Madonna paid tribute to the rapper in a raunchy Instagram video.

The Holiday hitmaker filmed herself dancing and writhing around

In another post, Madonna was jiving along to the rapper’s hit song with Megan Thee Stallion, WAP, captioning the clip: ‘[heart] U @iamcardib.’

It comes after Madonna insisted that she was responsible for helping young artists to embrace their sexuality.