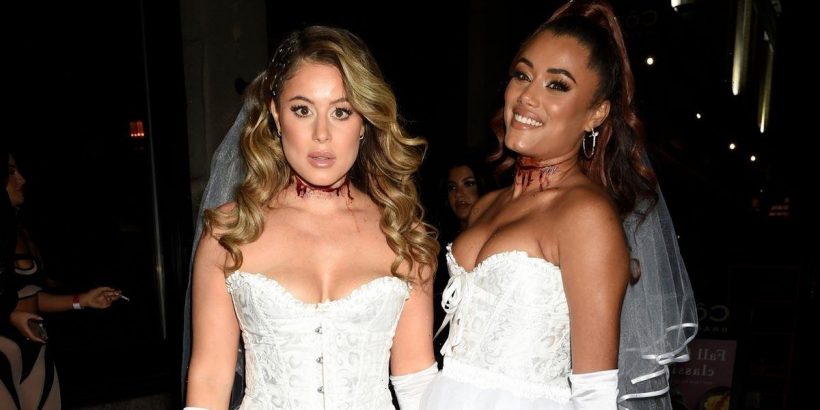 Married At First Sight UK 's Chanita Stephenson and Sophie Brown poked fun at their doomed marriages as they dressed up as zombie brides for the Nuage Halloween bash at Gaucho in Manchester on Sunday night.

Chanita, 29, tied the knot with Jordan Emmett-Connelly during their time on the show, while new pal Sophie married Jonathan Wileman. Ultimately, both couples split in the weeks after their final vow ceremonies.

The duo donned matching white bridal-style mini dresses and veils as they posed for snaps at the star-studded members-only event.

Both matched their skimpy outfits with long white gloves, and faux bloody slits on their necks.

The pair recently appeared in the show's end-of-season reunion, having both split from their on-screen husbands prior to attending.

Prior to her entrance the reunion, Chanita revealed her split in a voiceover, saying: "I’m actually really nervous walking into the dinner party tonight."

“To walk into a big room full of people, it’s quite daunting. Usually, I’d walk in with Jordan, but tonight I’ll be walking in solo.”

Talking to her friends on the show Chanita explain what has led to the split: "When we came out of the experiment, everything just changed.

"Basically, I kept saying ‘I feel like you’re not interested in me, you’re not making an effort, you’re not doing this’, and he’s all, ‘no, no, no, I can’t wait to see you’ – and then I was right!

“And then he was like, ‘oh, I don’t think we’re compatible, I don’t want to be with you’ – it was really weird,” she continued.

Meanwhile Sophie, whose relationship has also since ended, revealed that she'd had rather been paired up with a different husband on the show.

During an Instagram Live, the star was asked by a fan: "Who on the show would you rather have been paired with?" She then explained that she thought things could have worked with Pjay Finch, who she found attractive.

During her time on the show Sophie was diagnosed with ADHD, which she has since opened up about on Instagram.

She said: "Mental health especially is put to the back sometimes."

"If you’re a competent person at school or work you don’t always necessarily feel like you have ADHD because you’re still functioning, that’s called high functioning which is what I am."

She continued: "You live your day to day life but you have an internal battle with the things that are going on, so lack of focus, I get very easily distracted, I get major brain fog.

“When I'm trying to organise tasks procrastinate a lot. I still get things done but I have to battle with it.”

“As an adult and as as woman it can show itself in different ways,” she added.