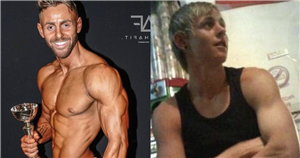 Adam Aveling has revealed his incredible body transformation, admitting he has been “obsessed with fitness and training” for as long as he can remember.

The Married At First Sight UK star, who was part of one the show’s biggest success stories with his partner Tayah Victoria, shared a before and after shot on Instagram in a bid to inspire his followers.

The online fitness coach wrote: “Sharing my own transformation!

“Sometimes it’s a great reminder what you as a person can achieve if you set your mind to it.

“Ever since I remember I’ve been obsessed with fitness and training, and I really do put training down as being the biggest reason for me being passionate, ambitious and adventurous towards life! “Everyone’s journey is different. If you want help seeing where your fitness journey might take you, hit the link in my bio!”

Since meeting Tayah on the hit Channel 4 show, Adam is feeling even more motivated.

Gushing about his partner, who he officially proposed to during the show’s final episode, Adam wrote alongside a sweet snap of them together: “Having the right woman in your life can make you feel inspired and powerful.

“I have never felt this before. It gives me another reason to get out of bed and graft!

In an exclusive interview with OK!, Adam and Tayah revealed how Tayah was “housebound” for months after moving in with Adam in order to keep the show’s outcome hidden. Tayah explained: "I've been housebound because obviously the show is still going on, so people don't actually know that Adam and I are still together.

The couple have also revealed their plans to have four children together in an interview with new, with Tayah gushing: “I didn’t even think that someone like Adam could exist. Honestly, I never thought soulmates were real until I met Adam. "I’ve always grown up wanting to have four children.”

While Adam added: “If we were financially sound then I’d say four definitely but, if not, maybe three!

“We are so easy in each other’s presence. When I go out with all my mates, I’m exactly the same person as I am with Tayah with them.