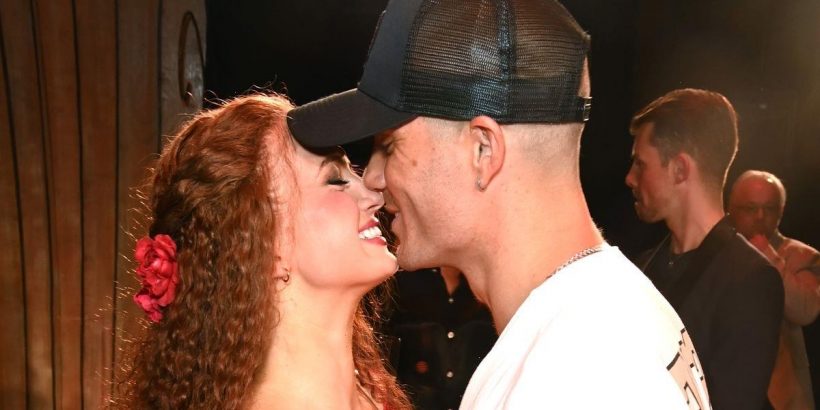 Maisie Smith has reportedly sparked a tense atmosphere with her Strictly Ballroom tour cast mates as she's been spending most of her free time with boyfriend Max George.

The 21 year old actress and The Wanted singer, 34, went Instagram official in September and have since been documenting their relationship on social media and at red carpet events.

Max has even joined the star on the road with the Strictly Ballroom cast, but it's now been reported the pair have left them "bemused" by not attending many social gatherings.

According to The Sun, the couple were staying in a £150 a night seaside Airbnb half an hour out of Sunderland, while the rest of tour dancers stayed in a more local area.

A source told the publication that the pair "wanted to spend all their time together," and the Celebrity SAS star went directly to him every night after each performance.

“Everyone gets on but they are slightly bemused by her absence because there has been lots of socialising, which she just hasn’t been part of," the insider explained. “She even missed a lunch for Kevin [Clifton]’s birthday last week – opting to be with Max instead.”

The source added that Maisie "doesn't follow the other dancers on Instagram" but as there's still a few more months of the tour, "everyone is hoping she warms up to them all soon".

OK! has approached both Maisie and Max's representatives for comment.

Last week, Max was pictured planting a congratulatory kiss on Maisie's lips following her performance of Strictly Ballroom The Musical, where she plays the role of Fran.

Following a press night at the Churchill Theatre in Bromley, London, Max and Maisie packed on the PDA for the cameras.

In several snaps, Maisie, who dressed in a red flamenco dress as she styled her long tresses down and curly, was embraced by boyfriend Max and kissed him.

Meanwhile, singer Max cut a casual figure in a baseball jersey, jeans and a cap.

As well as putting on a united front together, the new flames posed for photos with Maisie’s co-star Kevin Clifton and his pregnant girlfriend Stacey Dooley.

Matching with Maisie, Kevin wore his own flamenco outfit as Stacey showcased her blossoming bump in a lilac ensemble.

Kevin, who was previously a professional on Strictly Come Dancing, is playing the lead role of Scott Hastings in Baz Luhrmann's Strictly Ballroom The Musical.