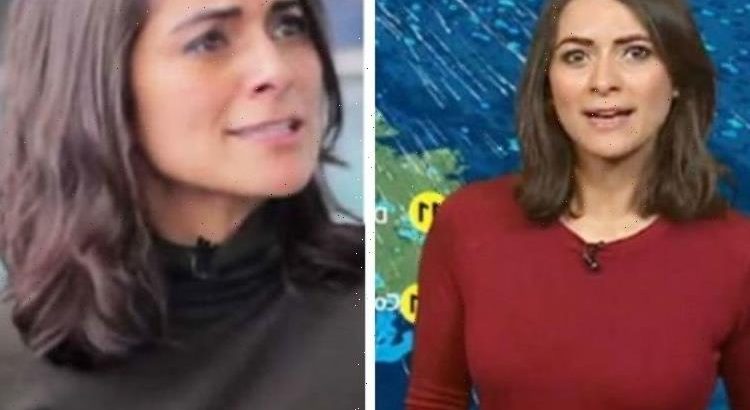 Lucy Verasamy stuns in a sparkly ensemble for weather forecast

With the festive log fires, mulled wine, Christmas carol sessions and seasonal cheer no longer warming the hearts of Britons, Lucy Verasamy has some bad news in store for the conditions ahead. Taking to Twitter, she broke the news to her 167,500 followers about the big freeze.

Make sure you don’t slide!

The ITV weather presenter and meteorologist urged the public not to “slide” while out and about.

” Freezing, frosty, ICY start to the night as temperatures slide… make sure you don’t!” she quipped.

She added the hashtags #ice, #slippery and #hazard to emphasise her weather predictions.

She also posted the details from the Met Office, stating: “Tonight temperatures will drop early, bringing a risk of ice on untreated surfaces.

“Temperatures will then rise during the early hours as cloud and rain pushes in from the west.

Temperatures have dropped drastically recently as winter gets settled in across the UK.

Even actor Ralf Little has made a public announcement about how bitterly cold the weather front has been, after 18 months filming Death In Paradise on the blissfully balmy island of Guadeloupe.

Meanwhile, Lucy used the hashtag #ThunderSnow to describe the conditions in parts of Scotland today.

One follower, @FightingFit2021 posted crying with laughter emojis, quipping: “So you’re saying its cold then Lucy.”

However @NewsMatterToday was more appreciative of the UK-wide update, telling Lucy: “Great to see you are featuring Northern Ireland in your coverage. Thank you!”

Lucy had also warned: “Feeling cold in the wind even where the sun comes out.”

A couple of days earlier Lucy had taken to Twitter to confess she was feeling tempted to wear sunglasses for driving, while featuring snowflake and sun rays emojis together.

Yet, if she was struggling with the Arctic-looking glare, that was perhaps nothing in comparison to another Twitter user’s dramatic confession.

“Drove without sunglasses near my parents once in a white VW Polo Fox 1.0L,” claimed @glennroast.

“Was turning right near my destination, sun was shining in my eyes.

“Didn’t wear sunglasses, should have done.

“Blinded by the light, pulled out & hit a van and it caused an almighty collision. Learnt from it.”

It’s likely that others will also be listening closely to Lucy’s important weather warnings ahead of icy conditions hitting the UK.