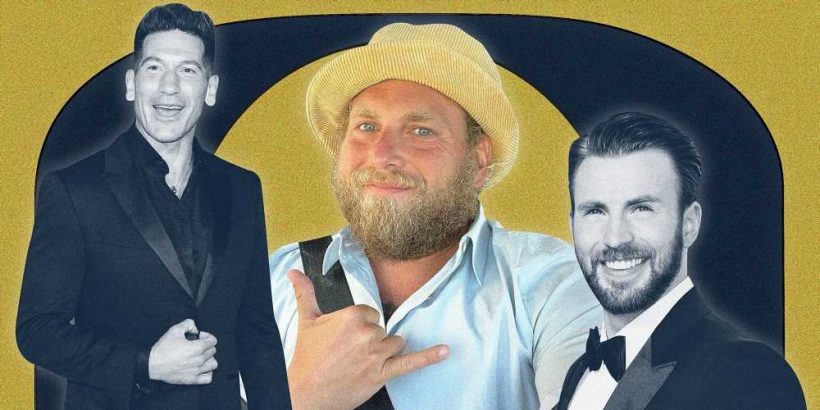 It is a well-established fact that culture is obsessively critical of women's bodies, and if you're a famous woman, you can expect every tabloid in the world to have something to say about every stretch mark you have and every bathing suit you wear. When the body police does come for a man it still hurts — but it hasn't always been socially acceptable for the guy to say so. It's refreshing when Jonah Hill speaks up on Instagram about the damage constant body-shaming has done to his mental health. "I know you mean well but I kindly ask that you do not comment on my body good or bad," he wrote on Instagram. "I want to politely let you know it's not helpful and doesn't feel good. Much respect."

Kumail Nanjiani, comedian and action star, is another actor who has spoken up about struggling with body image and anxiety. In a profile in Vulture, Nanjiani described feelings of body dysmorphia after he bulked up for a role and was subjected to merciless internet mockery. "The way I look has been way too important to me," he said. "And so to hear a bunch of people reaffirming my own darkest thoughts about myself was very difficult."

Nanjiani, who is pretty active on social media, is also one of the celebrity dudes who've spoken about anxiety and therapy online in a way that doesn't feel like a big, emotional reveal — just mentioning it as a part of their life. You know, how women tend to do. "Usually meditating really helps me with anxiety. But right now it feels like trying to chip away at marble with a banana," Nanjiani tweeted in October 2020. Nanjiani's fellow superhero star Chris Evans recently tweeted, "Nothing like anxiety for no reason whatsoever. Looking like a 4pm bedtime for me. Happy Friday!"

Am I … actually relating to straight men right now? Men, as a whole, are not exactly oppressed oppressed, but it is true that as a society we don't pay enough attention to men's mental health. Freeing men from the oppression of not being able to talk openly about their feelings and issues is a big part of feminism. There's no good reason that I shouldn't be able to relate to straight dudes just because they happen to be straight dudes, and there's no good reason those dudes shouldn't be able to relate to me. When women are described as overly emotional or neurotic, what people are actually describing are just human feelings. And when Chris Evans — a creature genetically engineered to exemplify the masculine ideal — fires off a tweet about his anxiety-induced bedtime, that gives other men permission to feel all those irrational anxious feelings too. And maybe this helps men not only go to therapy, but to better relate to the women around them. Maybe this even leads to men feeling more empathy for the women around them, too.

The thing that convinces men they must channel every emotion into anger in order to project strength and, thereby, masculinity, is the same thing that we feminists have been out here yelling about for centuries. That's right folks, it's the patriarchy. As feminist writer and author of For the Love of Men, Liz Plank tweeted, "Every single principle of the patriarchy, if followed to its extreme (as it is in the Texas law) ends up harming men too."

The times when men's mental health gets the most attention on the internet are usually in the wake of tragedies. Sometimes it's a flimsy gesture after a mass shooting, when some NRA activist will bemoan the poor state of mental healthcare in this country unironically. Other times it feels more personal, like after a beloved cultural figure like Robin Williams or Anthony Bourdain dies by suicide. But if this is the only time we have these conversations, what good are they really doing? If we really want to do something to stop deaths by suicide, the majority of which are men, we kinda need the everyday openness about it that these guys are giving.

We also need more honest, even painful discussions about the reality of depression and suicidal ideation. Rapper Lil Wayne has been a particularly brave and important voice in this respect. He's been open about his mental health in the past and in lyrics, but perhaps never more so than in an August interview with Emmanuel Acho, host of "Uncomfortable Conversations," where he described attempting suicide at age 12 in gut-wrenching detail. But importantly, Lil Wayne also emphasized the importance of speaking about mental health honestly. "[I'm] hoping I can help anyone else out there who's dealing with mental health problems by … being vulnerable," he said. "To me, I look at it by being brave and stepping up."

Destigmatizing therapy is another way some of our favorite Sensitive Men have been helping others. Like Prince Harry, who has made mental health one of his key issues as the Duke of Sussex, who has talked about his own EDMR therapy, and even invited cameras to film one of his therapy sessions. Or Jon Bernthal, who in a viral interview said, "Having empathy for people, having compassion for people, helping people, wanting to be there for someone in need … that's what I think being a dad's about, being a man's about."

Now, I don't know if everybody needs to go televising their therapy sessions or anything, but the more normal it becomes, the closer we get to eradicating the "are men OK" meme for good. When superheroes, rappers, and princes are all coming together to let other men know that anger is not the only emotion they are allowed to feel, maybe men will actually start to believe them. What a world that would be.