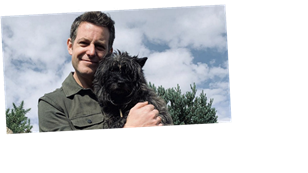 Matt Baker has hinted at his struggles to strike a balance between his work and home life after quitting The One Show to focus on his kids.

Former Blue Peter star Matt, 43, opened up on his difficulties after he gave up his role of president of the National Federation of Young Farmers' Clubs.

After it was reported former The One Show host Matt had stepped down from his role, he apologised and admitted he needed to find time for his children Molly and Luke.

He told The Farmers Guardian: “I’m sorry. I can't get out there and see you because I'm so busy.

“I don't want to play the old family card but I'm sure all the families will know I've got young children.”

Matt admitted that he tries to prioritise spending quality time with his kids while he’s not working.

He said: “When I'm not at work I'm trying to see them. It gets very difficult.”

It comes after Matt quit his co-presenting role on The One Show last year.

He said at the time: “I’m continuing with Countryfile and BBC Sport and excited about other opportunities that come my way but most of all I’m looking forward to having dinner with my family and being able to put my kids to bed.”

Meanwhile, a spokesperson for BBC said: “We are drawing on our existing family of presenters – made up of men and women – to present alongside Alex Jones.”

Matt’s co-host Alex Jones, who recently opened up on arguing with her husband in lockdown, paid an emotional tribute to him after his last day on the show.

Alex, 43, took to Instagram to reveal her sadness over Matt’s exit, sharing a poignant selfie of them filming the show together before they went on air.

The mother-of-two wrote alongside the snap: “Goodbyes are always hard @mattbakerofficial so it’s gonna be a tough @bbctheoneshow tonight. Join us at 7pm… we might all need some tissues.”

She later broke down in tears as she and Matt were forced to say their goodbyes via video link as he appeared on the BBC show for the final time.

Matt made his final appearance via video link as he was forced to isolate after a member of his family showed symptoms of the coronavirus.

Matt told Alex as he spoke of their friendship: “I’ve watched your life change as well, you’ve got married and had two children. It’s quite amazing that we’ve been there together for nearly ten years. Thats rare in the world of television, so thank you for all of your support.”

A tearful Alex then added: “No, thank you. And you are holding it together way better than I am.”

She then broke down again, telling Matt: “It just feels so odd. I know when you’re going to speak just by the way you breathe because we’ve been together for that long. We’ve had such a laugh along the way and I thank you from the bottom of my heart.”