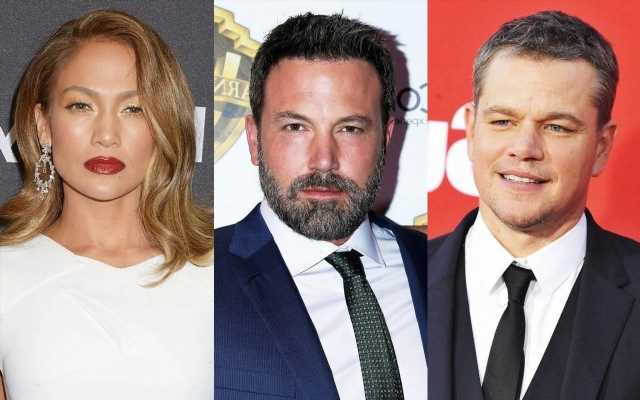 The ‘Martian’ actor is shipping his best friend and on-again girlfriend, wishing the new couple nothing but happiness as their new romance heats up following reconciliation earlier this year.

AceShowbiz –Matt Damon has said no one is “pulling harder” for Jennifer Lopez and Ben Affleck‘s rekindled romance than he is.

The 50-year-old actor opened up about the couple’s relationship during a Q&A round in an upcoming interview for “The Carlos Watson Show“.

“Oh man, no one’s pulling harder than I am,” Damon said, according to People magazine.

“They’re both great,” the “Stillwater” star added. “I just want for their happiness. They seem pretty happy right now.”

The “Gone Girl” actor has spent time with Lopez’s family in recent months, including a joint family outing that was attended by his own kids, who he shares with ex-wife Jennifer Garner.

The pair rekindled their relationship after the singer and her fiance, former baseball star Alex Rodriguez, called it quits in April (21).

“We have realized we are better as friends and look forward to remaining so,” the couple said in a statement at the time.

Affleck and Lopez first started dating in 2001 and got engaged in 2002 before splitting in 2004 amid tabloid pressure on their relationship.

They confirmed their romance with a steamy kiss picture the singer shared on Instagram in honour of her 52nd birthday last month.

The “Saving Private Ryan” actor and the “Argo” star have been friends since their childhood and their bromance got stronger as they made movies together.

“I’ve known him for 35 years, and we grew up together,” he told Entertainment Tonight in 2016. “We were both in love with the same thing – acting and filmmaking. I think we fed on each other’s obsession during really formative, important years and that bonded us for life.”