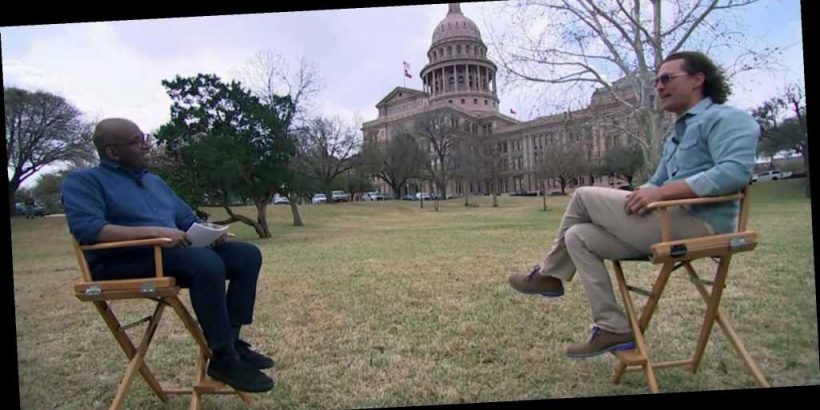 Could Texas one day be led by Gov. McConaughey?

Al Roker decided to get to the bottom of the rumors on TODAY Friday when he asked Oscar-winning actor Matthew McConaughey if he is considering a potential run for governor in his home state. The next gubernatorial election in Texas is in 2022.

"Look, it's a very honorable consideration," McConaughey said. "So am I considering that? Sure, it's a great thing and an honorable thing to be able to consider.

"What I've gotta choose for myself is, I want to get into a leadership role in the next chapter of my life. Now, what role am I gonna be most useful in? I don't know that that's in a political position, or if that's me as a free agent. It might be me as a free agent. So that's something I'm personally working on is what is my position of most use in a leadership role."

McConaughey, 51, was born and raised in the Lone Star State, maintains a home there, and is a 1993 graduate of the University of Texas.

He also wouldn't be the first actor to try his hand at being a state governor, as Arnold Schwarzenegger demonstrated in leading California in that role from 2003-11. Former President Ronald Reagan was an actor before becoming California's governor in 1967, and pro wrestler and "Predator" star Jesse Ventura was Minnesota's governor from 1999-2003.

Al discovered that McConaughey already has at least one eager voter when they paid a visit to Jessie Norwood. The 93-year-old Texas woman met McConaughey years ago when he and his family were giving out food from Meals on Wheels on Thanksgiving.

The woman McConaughey calls "a really, really bright light" had not seen him in more than a year because of the pandemic. Now that she has been vaccinated, he and Al were able to pay her a surprise visit on TODAY, leading to an immediate question for her old friend.

"When are you gonna run for governor?" she said.

"He asked me the same thing this morning!" McConaughey said about Al.

"I got one vote!" McConaughey replied.

Al was visiting the "Dallas Buyers Club" star on his home turf in Austin on Friday because of a much more pressing issue than McConaughey's political ambitions — helping those devastated by last month's winter storm. Many residents have been left with destroyed and flooded homes from pipes bursting and rupturing from the weather conditions.

"It's not like fires or tornado or a hurricane. You don't drive down the street and see the graphic problem from the street," McConaughey said. "But go inside the front door of so many houses and businesses, now you're seeing all the water damage that needs to be fixed, you're seeing people that need clean water that don't have it.

McConaughey and his wife, Camila Alves, are doing their part to lend a helping hand by holding a virtual fundraiser called "We're Texas" at 8 p.m. EST on March 21 on McConaughey's YouTube page.

The concert and benefit already has a Texas-sized guest list with Chip and Joanna Gaines, Kelly Clarkson, Willie Nelson, the Jonas Brothers and Selena Gomez.

"Everybody I've called, within the first two minutes, 'I'm in, I'm in,'" he said. "I haven't had to call anybody back. So Texas is really helping out the people that are gonna need it."

McConaughey said he will be the host who will introduce the bands. He then had Al doing a double take when he said he may do some rapping.

Before their time was up, Al just wanted to double check that McConaughey didn't want to make any type of announcement about his future plans.

"The announcement I'd like to make today is that on the 21st of March, 2021, at 7 p.m. Central Time, on my YouTube channel, you're gonna see a revival and a restoration of people coming together to help out Texans that were hurt and lost food and clean water and ability to live in their own houses," he said. "We're gonna come together, we're gonna help out our neighbors here in Texas. And we're inviting the world to come in and help us out as well. It's gonna be a shindig."