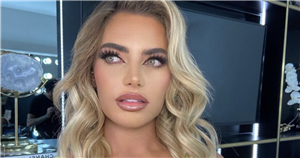 The subscription platform announced its decision to ban sexually explicit content as it unveiled the new OnlyFans Acceptable Use Policy last week.

OnlyFans is popular for raunchy content and many celebrities had created profiles to share photos and videos with fans – including Kerry Katona,Lauren Goodger and Megan Barton-Hanson.

Following the huge change on the platform Love Island star Megan, 27, has spoken out against the move.

She told Vice: "I am disappointed Only Fans have decided to remove all sexually explicit videos.

"It used to be a beacon of hope in my eyes and I thought that stigma around sex work would be diminished but now it feels like we are back at square one. Sex workers have always been treated unfairly and this is another example of that."

Megan is understood to make hundreds of thousands of pounds a month from her onlyFans, said she is also concerned about the effect the move will have on the sex work community.

"I am worried about those content creators who will be affected," she said.

"It seems so unfair. OnlyFans has been a really safe way for people to sell their images and earn money from home. During the pandemic, this has been a lifeline for so many."

Shortly after signing up to the platform, Kerry shared a photo of herself confidently posing on a black lace underwear set and explained her decision in May last year.

As she posted the photo on her Instagram page, Kerry wrote in the caption: "Other people opinions of me isn’t any of my business! Don’t live your life by others! Life is too short.. #bekind ALWAYS,” followed by a red heart emoji, kissing emoji and high five emoji.

She was later reported to have earned £1million by selling foot fetish snaps on OnlyFans in July this year.

But, she later denied the claims by writing in her new! magazine column: "There were some headlines last week about me making £1million on OnlyFans from pictures of my feet.

"Yes, I’ve done foot pictures in the past, but I don’t think that’s where I’ve made my money from!

"I was asked if I’ve ever been asked for pictures of my feet and it was turned into the headline.

"Fair play to the journalist – they were just doing their job. But just for the record – I think it’s my boobs that have played a massive part in that million!"

For all your updates on Megan Barton-Hanson, Kerry Katona and more of your favourite stars, sign up to our daily OK! newsletter.