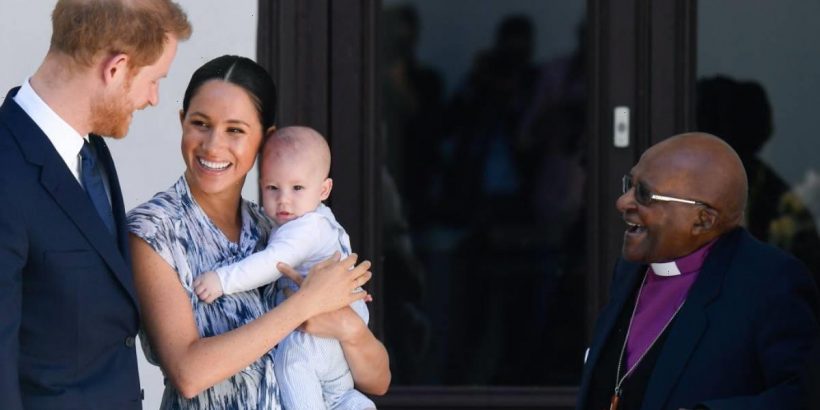 Prince Harry and Meghan Markle have paid tribute to Archbishop Desmond Tutu who has sadly died.

The couple gave a statement and said: “Archbishop Tutu will be remembered for his optimism, his moral clarity, and his joyful spirit. He was an icon for racial justice and beloved across the world.

DISCOVER: 8 unusual Christmas gifts the royals have given each other

“It was only two years ago that he held our son, Archie, while we were in South Africa – ‘Arch and The Arch’ he had joked, his infectious laughter ringing through the room, relaxing anyone in his presence. He remained a friend and will be sorely missed by all.”

Archbishop Tutu, who won the Nobel Peace prize in 1984 for his part in helping to end the apartheid system in South Africa, died on Boxing Day.

The Duke and Duchess of Sussex met the Archbishop back in 2019, during their royal tour of South Africa. It was one of the first times royal fans saw their son Archie, who enjoyed having tea with his parents and Desmond Tutu.

The Queen released the following statement: “I am joined by the whole Royal Family in being deeply saddened by the news of the death of Archbishop Desmond Tutu, a man who tirelessly championed human rights in South Africa and across the world.

Meghan and Harry met Desmond when Archie was a baby

“I remember with fondness my meetings with him and his great warmth and humour. Archbishop Tutu’s loss will be felt by the people of South Africa, and by so many people in Great Britain, Northern Ireland and across the Commonwealth, where he was held in such high affection and esteem.”

Harry and Meghan released a statement

A statement on behalf of Desmond’s family from Dr. Ramphela Mamphele, acting chairperson of the Archbishop Desmond Tutu IP Trust, read: “Ultimately, at the age of 90, he died peacefully at the Oasis Frail Care Centre in Cape Town this morning,” reports Sky News.

Make sure you never miss a ROYAL story! Sign up to our newsletter to get all of our celebrity, royal and lifestyle news delivered directly to your inbox.