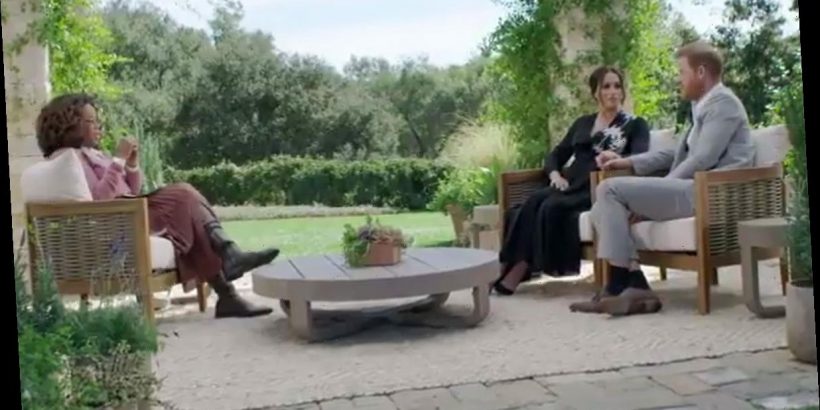 The first look at Meghan Markle and Prince Harry‘s interview with Oprah Winfrey is here.

On Sunday, two 30-second excerpts from the sit-down Oprah with Meghan and Harry: A CBS Primetime Special, were released.

MORE: Meghan Markle chose the most stunning silk dress for her Oprah interview

The first clip shows Oprah questioning Meghan whether she was “silent or silenced”, and later asks the Duchess: “Almost unsurvivable. Sounds like there was a breaking point?”

The video then cuts to Harry, who remarks: “My biggest fear was history repeating itself.”

At the end of the first preview, Oprah, who is also one of Meghan and Harry’s neighbours in their Montecito neighborhood in California, told the couple: “You’ve said some pretty shocking things here.”

In the second clip, the Prince says he is grateful to have had Meghan’s support during his exit from royal life, while also drawing comparisons with his late mother, Princess Diana.

WATCH: Oprah with Meghan and Harry: A Primetime Special preview

He tells Oprah: “I’m just really relieved and happy to be sitting here, talking to you, with my wife by my side, because I can’t begin to imagine what it must have been like for her, going through this process by herself, all those years ago.

“Because it has been unbelievably tough for the two of us, but at least we had each other.”

MORE: What Prince Harry and Meghan Markle’s royal wedding was really like – as told by insiders

Oprah, who attended the couple’s May 2018 wedding at Windsor Castle, is set to have an “intimate conversation” with the Duke and Duchess of Sussex for a 90-minute primetime special, according to CBS.

The interview is set to air on 7 March

“Winfrey will speak with Meghan, The Duchess of Sussex, in a wide-ranging interview, covering everything from stepping into life as a Royal, marriage, motherhood, philanthropic work to how she is handling life under intense public pressure,” the network said in a statement.

“Later, the two are joined by Prince Harry as they speak about their move to the United States and their future hopes and dreams for their expanding family.”

The interview, which will air on 7 March, comes after Buckingham Palace confirmed that Meghan and Harry will officially not be returning to their royal roles.

Make sure you never miss a ROYAL story! Sign up to our newsletter to get all of our celebrity, royal and lifestyle news delivered directly to your inbox.