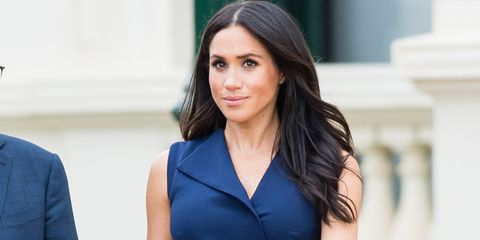 Earlier this week, the Duchess of Sussex caused Karen Gee’s website to crash when she wore one of the designer’s dresses. And now, another Australian designer has also experienced the Meghan Markle effect, thanks to a chic navy dress that the royal selected for her flawless tour wardrobe.

Stepping out in Melbourne, Australia wearing the chic navy Folded Sail dress, the Duchess likely had little idea just how much her fashion choice would impact upon Dion Lee’s business. Meghan’s look is from the brand’s pre-fall collection, and consists of an asymmetrical design, with a ruffle at the skirt, and a striking folded collar.

Journalist Melissa Singer shared a statement from designer Dion Lee on Twitter. Lee said, “It’s a whole other level [of attention]. I can’t say our website has ever crashed as a result of anyone wearing our clothes.” Meanwhile, Meghan’s navy dress was apparently “based on a previous dress of ours that she really liked.”

Twitter account @meghansfashion revealed that Meghan’s exact dress would be available to pre-order soon, though. Tweeting the news, they revealed, “I just spoke with Dion Lee! #DuchessMeghan’s dress is a new collection piece from their Pre-Fall 19 collection. It’s called the Folded Sail dress and will be available for pre-order by the end of the day via their website.”

Meghan accessorized the look with a Gucci bag, which is still available, because it’s your lucky day: